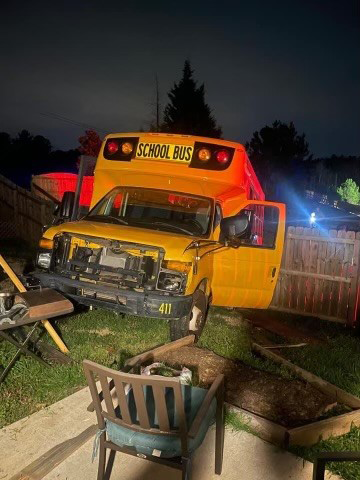 (Paulding County, GA) Paulding Deputies and Troopers with the Georgia State Patrol arrested a local man for stealing a Paulding County school bus and taking it on a “Joy Ride”.
In the early morning hours of Tuesday, March 22, 2023, at approximately 3:49 AM, Paulding E-911 was contacted by a citizen regarding a Paulding County school bus that had crashed into a fence in their yard. The driver, who was later identified as Austin Green, was reportedly intoxicated and subsequently restrained by neighbors until Deputies could arrive.
It was later determined that Green forced entry into the gate at Moses Middle School where he later stole the bus. After a brief “Joy Ride” he crashed the bus into the fence of the residence at 23 Birch River Point Dallas, GA 30132. The investigation into this incident was conducted by both the Paulding County Sheriff’s Office and the Georgia State Patrol. Green was charged with the below-listed offenses:
Austin O’Brian Green (W/M, 23 YOA)

Green is being held in the Paulding County Jail without bond where more charges are pending. Deputies want to encourage anyone who may have seen this incident occur, or if anyone has any additional information, please call the Criminal Investigations Tip Line at (770) 443-3047 or submit a tip via the Paulding Sheriff mobile app.