Earning the opportunity to compete in a regional horse show is a huge accomplishment for anyone, no matter who they are. Thirteen states will go head to head with only their best in the 4-H Southern Regional Competition, which will be held in Perry, Georgia this year. The competition is set to run from August second through the sixth. Paulding County will be sending four of it’s own to participate in this huge show. These competitors are Juliette McKinley, Chloe Moody, Miranda McTyre and Ashley Rossman.
At the 4-H State show, the four 4-Hers won multiple awards, and not all of them have to do with riding horses. This is where 4-H gets interesting. It doesn’t only have to do with horse and pony, but there are a variety of other things to compete in. Juliette Mckinley entered in several of these classes in addition to two horse classes. She competed in and won the Public Speaking and Team Demonstration classes, placed second in Photography and Drawing, and placed third in Painting. As for the horse side of the State Show, Juliette placed seventh in the Hunter Hack class and tenth in Pony Hunter Under Saddle. She will be representing Georgia in the Public Speaking Competition. 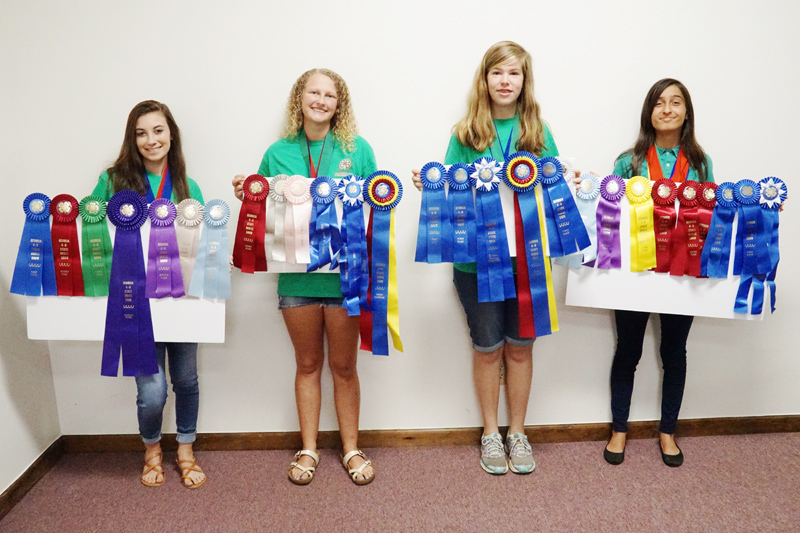 Chloe Moody won first place in Senior Ground Handling, second in Senior Cow Sorting, sixth in Senior Ranch Pleasure, seventh in Senior Reining, ninth in Senior Working Cow Horse, and tenth in Senior Ranch Trail. Chloe placed seventh overall in the Ranch Division. Miranda McTyre won first place in the Senior Hunter and Western Showmanship classes, placed second in the Senior Western Pleasure, fifth in the Senior Western Horsemanship, and ninth in Senior Hunter Under Saddle. Miranda also earned her Master 4-H title for placing first overall, winning the Stock Seat Division and earned a $500 scholarship. Ashley Rossman placed first in the Racking class, the Senior Saddle Seat Pattern Equitation class as well as the Senior Saddle Seat Equitation (both non-trotting) classes. She placed fourth in the Senior English Showmanship In Hand class. Ashley also earned the Sportsmanship Award and earned her Master 4-H title for placing first overall winning the Saddle Seat Division and earned a $500 scholarship.
If you would like to join Paulding County 4-H, you do not need to own a horse; you just have to have a love for horses and want to learn more about them. Our membership is open to all from ages 5-18. For more information, please contact our Volunteer Leader, Annette Raybon at 770-445-8655.