Paulding Board of Commissioners voted in support of an agenda item brought to the Board last week during their first session for May by Post 3 Commissioner Vernon Collett that proposed a change to the meeting broadcast ordinance allowing for gavel to gavel coverage to include entire public participation segments. 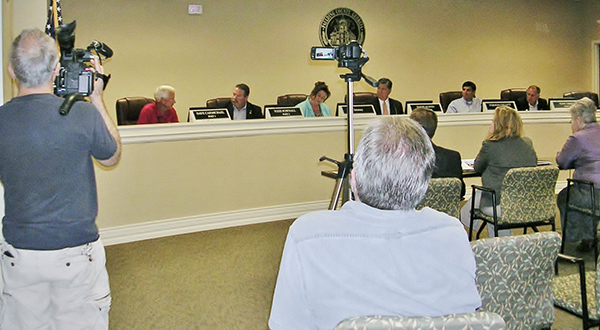 Commissioner Collett stated that his takeaway from a recent Association of County Commissioners of Georgia (ACCG) course was in favor of offering unedited coverage of commissioners meetings in the interest of greater transparency in government. The resolution amends section 2-61 of the Paulding County code of ordinances regarding the videotaping and broadcast of Board of Commissioners meetings. Board meetings are posted for viewing on the county website at www.paulding.gov.
Commissioner Carmichael suggested that some additional parameters be added to reduce redundancy of topics and Chairman David Austin, also citing ACCG training, stated that negative material broadcast as a result of an approval of the agenda item, could potentially affect the county’s Bond rating.
A credit rating is Standard & Poor's opinion on the general creditworthiness of an obligor, or the creditworthiness of an obligor with respect to a particular debt security or other financial obligation. Over the years credit ratings have achieved wide investor acceptance as convenient tools for differentiating credit quality.
Both Commissioners Collett and Post 4 Commissioner Tony Crowe remarked that freedom of speech was important to citizens and should be part of the decision in whether or not to offer complete video coverage of meetings. Crowe also made reference to a comment that Collett had made on another issue in a previous meeting.
“Vernon [Colette] said that sometimes doing the right thing may cost us in the short term, but in the long term will pay off.” Commissioner Pownall asked Finance Director Tabitha Pollard how long the county had held its AA rating. Ms. Pollard responded since 2009. The county holds an AA rating from both Standard and Poor’s and Moody’s.
But Chairman Austin added that if the measure were approved and eventually did lead to a negative impact on the Bond rating, he would not be responsible. Austin and Carmichael voted against the agenda item, which passed 3-2 during the Board’s May 12 afternoon session. Commissioner Collett commented following the wrap-up of the Board’s morning session that he didn’t feel that the change in the meetings broadcast ordinance would impact the county’s bond rating, particularly in the current internet-driven age in which information travels so much faster than ever before.
“Look at the social media we have today. Nowadays, with something happening here, before I can go out and get in my car, everybody in the county knows about it,” he said.
But Collett also noted that the change may not always be pleasant. “Look, I know this may come back and bite me, somebody may get up there and have some nasty things to say about me, but that’s the way it is,” he said. “It’s an open government issue and I think if you’re really saying you’re going to be transparent and open, than be transparent and open, otherwise you’re not.”