Since the project’s groundbreaking ceremony last year design renderings for the Richland Creek Reservoir (RCR) are beginning to take form in the real world at the project site, where work is progressing on schedule.
The RCR is being located on approximately 700-acres of county-owned land in northern Paulding County, in Post 4 Commissioner Tony Crowe’s district. The RCR will be on Richland Creek, but will be filled with water from the Etowah River.
In July of last year Paulding commissioners approved the construction of the Richland Creek Dam and Reservoir to lowest bidder Brad Cole Construction in the amount of $42,708,932.67. Overall the program is on track with its projected $215 million total budget. Funding is coming from a mixture of county-issued bonds, loans from the Georgia Environmental Finance Authority, and state grants. Last year the county also approved water rate hikes to help with the RCR bonds.
The reservoir is designed to yield about 35 million gallons per day and will provide about 3.43 billion gallons of water storage to support Paulding County.

The project’s lineage involves a pump station at the Etowah, three miles long, and then another pump station in the reservoir that pumps water out into the treatment plant, and then another pump station that sends the water through 12 miles of pipe to Dallas. Brown and Caldwell, the largest engineering consulting firm solely focused on the U.S. environmental sector, is serving as the county’s Program Manager and responsible for ensuring coordination of program tasks and contractors, maintaining schedule, managing project budgets, cost accountability, and communication of program progress with the public and other stakeholders.
Senior Client Service Manager Mark Lethbridge recently accepted the Paulding Chamber of Commerce’s Community Development award for the project. 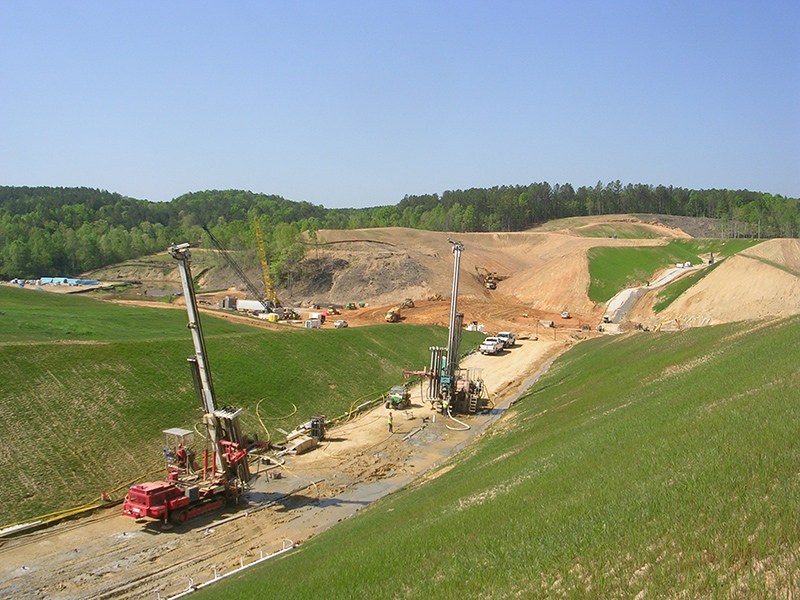 According to Brown and Caldwell’s Mark Harber, senior associate/construction services leader, the grouting operation in support of the dam will go on for the next five months or so. The dam itself is over 4,000 feet long, he said. Construction of the finished Water Pipeline and Booster Pump Station is expected to complete by March of 2019, with project completion expected around 2021.
“We’ll probably start impounding water sometime late next year, I’m guessing,” Harber said.
Paulding’s dam project as an earthen dam is the most cost-effective, given the geological features and natural resources available at the site, structural fabricated dams can cost twice and even three times as much to construct, Harber said.
The project itself has ties back to the Bill Carruth administration. Carruth began to pursue the RCR after realizing that Paulding was one of the only counties in the state solely dependent on another government entity, the Cobb-Marietta Water Authority, for 100 percent of its water.
Carruth has characterized the project as “...likely the most important public works project in our history” and added that “...with the Richland Creek Reservoir, the county will be able to compete and attract industry...and most importantly, we will have independence and the ability to manage our own water.” Paulding County has an agreement that runs until 2032 with Cobb- Marietta Water Authority, an independent state-chartered agency, which receives water from Lake Allatoona, a USCOE-controlled reservoir.
In terms of growth within the county through the same period, Atlanta Regional Commission population projections show Paulding growing to 255,000 residents by 2040.

1. Design rendering including dam area. (submitted, Brown and Caldwell)
2. Structural work in support of the dam at the project site for Paulding’s Richland Creek Reservoir will continue through 2018. (Photo: R. Grant)