Paulding County Sheriff’s Headquarters and Detention Center construction has unearthed some unexpected challenges in recent months, according to Comprehensive Program Services’ President/CEO Eric Johnson, who addressed Paulding commissioners recently.
Johnson told commissioners that Turner Construction encountered an estimated 11,000 cubic yards of underground granite. The rock has to come out before construction can proceed and could add about $665,000 to the price tag, he said.
The granite is too hard to be drilled out by excavation machinery and must be blasted out, Johnson said. The builder is working to determine its exact size and location of the rock, but it is apparently spread over much of the building site. It’s also likely it’s in greater concentration beneath the planned eastern end of the 191,000-square-foot complex, he said. Johnson said he planned to meet with Nova Engineering concerning the amount of underground rock found. Nova is the firm that did the testing of the site’s subsurface area to determine if it was suitable for construction.
Johnson did not comment further on why the large concentration of rock was not detected at an earlier stage. “I’ve had some questions; I don’t have any answers,” Johnson told commissioners. “We’ll get to the bottom of it.” Building redesign options drove costs up to $1.8 million as per architects Wakefield, Beasley & Associates. But removing the rock by blasting was deemed the least costly method at a cost of about $665,000, he said. Commissioner Todd Pownall responded to Johnson’s report with concern for the new developments and associated costs. Also changed and driving some cost increase is the design of the building’s facade, Johnson told commissioners, to conform to the city of Dallas building design requirements.
But Johnson said he believes that the project can stay true to its projected timeline for completion in early 2020. “The big delay is in getting all of the rock out of the way,” he told commissioners. Meanwhile, builders also discovered a trash pit directly beneath the planned site of a jail visitation building that will not be attached to the main complex building, Johnson said.
The pit is 300 feet long and 8 feet deep and filled with parts of trees, stumps, and other organic materials. Johnson said it could have come from the site clearing for the nearby Watson government complex in the mid-2000s, but he could not say for sure. Cost to relocate the building was unknown, but a building could not be placed atop the trash pit, Johnson said. Most likely a parking area would be put over that location instead.
A Georgia Sheriff’s Association study indicated the need for 660 beds in the new jail and a total facility of 250,000 square feet. Specifications for the new jail showed the delineation of space for the new facility with almost 134,000 square feet dedicated to jail operations and housing and just under 59,000 square feet for administrative and another almost 20,000 for the visitor center and outbuildings. Overall the facility was said to be just shy of 248,000 square feet.
Johnson has been keeping the BoC updated since they voted to pay $2.12 million for 25.3 acres of land adjoining the north side of the county courthouse at the Watson Government Complex for construction of the new Paulding County Sheriff’s Office headquarters. The BoC purchased the land — which also adjoins West Memorial Drive and the Norfolk Southern Railroad tracks in West Dallas — from former county school board chairman Joe S. Watson and Patricia Watson. Johnson said he would return to give commissioners updates on the project on Oct. 9.
News about the project is ongoing and can be viewed at the website, pauldingjail.com 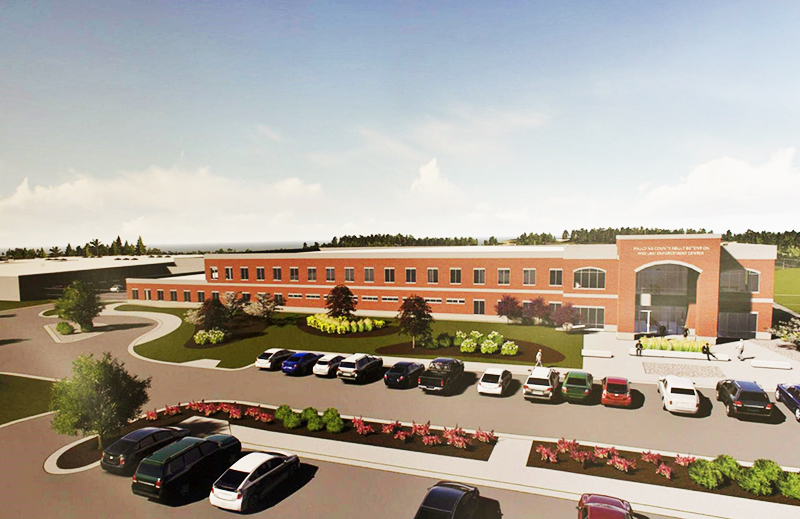 Design rendering of the completed Paulding County Sherriff's Office and Detention Center under construction at the Watson Government campus. Completion is targeted for early 2020. (CPS/submitted)