(Paulding County, GA) At approximately 2:53 PM on Monday, October 29, 2018, Paulding E-911 received a 911 call reference a fight in progress at 8478 Dallas Acworth Highway Dallas, GA 30132. While Deputies were en route to the scene, the call was upgraded to a shooting in progress involving multiple individuals. When Deputies arrived on the scene, they encountered multiple individuals and noticed that several vehicles had been shot along with one white male subject. Deputies quickly took all parties into custody without discharging their weapons which helped secure the scene.
As a result of the investigation and subsequent search warrant which was served at the residence, it appears that the incident began over a land dispute regarding some property lines. The resident of the home, Rickey Allen Kilgore, came out of the house and initially had a verbal confrontation with the two victims who were there to mark some property lines. As the verbal altercation got heated, Kilgore went into the residence and returned with a hammer of some sort threatening the victims. Kilgore then went back into the residence and retrieved a rifle and began firing rounds at the two victims, striking one of them in the leg. In the midst of the incident, the other victim (who had not been shot) retrieved a firearm from his vehicle and returned fire. Kilgore then went back into the residence and got a shotgun and began firing more rounds at the victims who were pinned down behind vehicles. 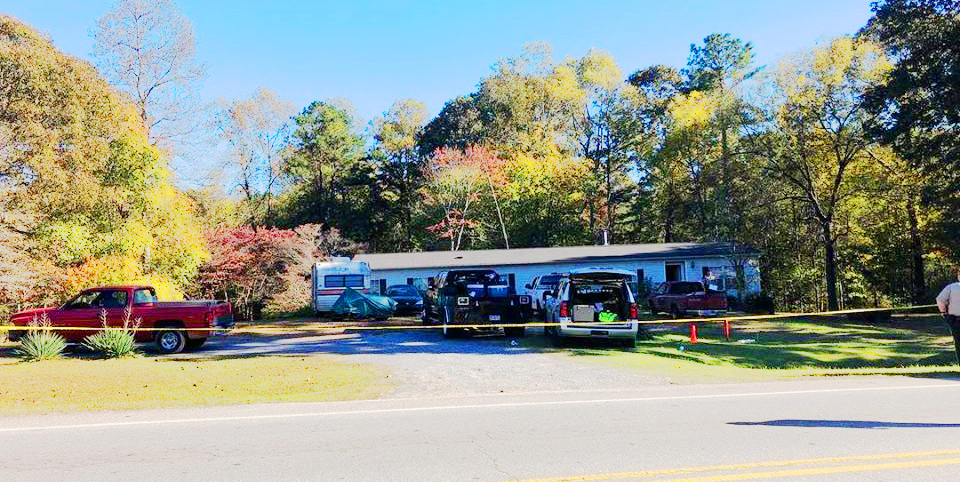 As Deputies responded to the scene and took everyone into custody, they secured the location and all of the weapons. After the scene was secure, Detectives and Agents with the Haralson-Paulding Drug Task Force executed the search warrant to search the residence. That search revealed an indoor marijuana growing operation inside the mobile home. Detectives and Agents also collected evidence pertinent to the incident along with several firearms. The victim that was shot in the leg is expected to recover as it was not a life-threatening wound. At this point in the investigation, the following individuals have been arrested and charged with the below-listed crimes. The investigation into this incident will continue and more charges could be pending.

It must be noted that there was also a traffic accident that occurred in the area north of the scene which was not directly related to the incident at 8478 Dallas Acworth Highway. Rumors and questions had been swirling that the incidents may be linked, they were NOT related.
Detectives want to reach out to anyone who may have been passing the area of 8478 Dallas Acworth Highway between 2:45 PM and 3:10 PM on Monday, October 29, 2018. If you saw any of this incident occurring, please call Detectives at (770) 443-3015 to let them know what you saw.