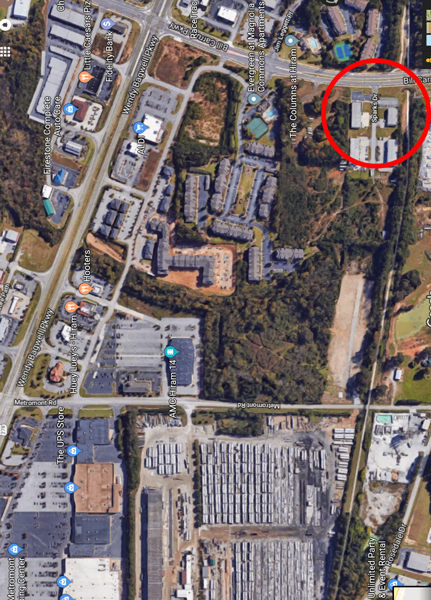 Earlier today, around 12:28 PM, the City of Hiram Police Department responded to a missing child/possible abduction call at the Academy Sports and Outdoors store in Hiram, Georgia. Soon after the call came out, the child was located at the Walmart store which is directly across the street from Academy Sports. The child is fine and was in good condition when he was located.
Officers with the City of Hiram Police Department Officers along with Paulding County Sheriff’s Office Deputies and Detectives were able to determine that a nine-year-old boy was at the Academy Sports store with his father and a sibling. The child alleged that a masked man physically took him from the store and he somehow ended up at Walmart across the street. Alert Hiram Police Officers spotted the child in the parking lot and were able to get him to safety before anything tragic could happen.
Deputies, Officers, and Detectives viewed the surveillance footage and watched the boy walk out of Academy Sports store by himself and then run across the parking lot by himself. Video footage shows that the child was not abducted. It must be noted that this is the same child from the incident that took place on Sparks Drive at the karate school on January 24, 2019. Detectives are still looking into the incident that took place on Sparks Drive and encourage anyone who may have information to give us a call. If you have any information regarding this case, please call the Paulding County Sheriff’s Office Crimes Against Children Division at (770) 445-6105.

(Paulding County, GA) On January 24, 2019 at approximately 7:02 PM a 911 call was placed to Paulding E-911 reference an attempted abduction. The attempted abduction allegedly occurred in the parking lot of the Breakthrough Martial Arts, Inc. center which is located at 10 Sparks Drive Hiram, GA 30141. At that same time, another 911 call was placed from the UPS Store which is located at 5220 Jimmy Lee Smith Parkway Suite 104 Hiram, GA 30141, stating that the boy that was allegedly abducted had been located. The boy had been at the Breakthrough Martial Arts center for a class that supposedly ended at 6:45 PM. As he and his mother were leaving the facility and getting into their car, that is when the alleged abduction occurred in the parking lot of the martial arts center.
At this point, Detectives have spoken with the mother of the child as well as the child himself about the alleged incident. Thus far, Detectives are receiving conflicting stories from all of the parties involved. Detectives have combed the area and have not been able to locate any video surveillance footage that shows the incident occurring. Detectives did locate one witness who stated that they did not see the abduction attempt, but that they did see the boy run away from the area. According to the child, the male suspect is a white male with a beard who was wearing all black clothing. According to the mother, she never actually saw what the male looked like.
There have also been allegations that a “Good Samaritan” stepped into to foil the attempted abduction. Detectives have not been able to locate the Good Samaritan either. The Paulding County Sheriff’s Office takes any and all allegations into the safety of our children very seriously. We are looking into this incident to determine what actually took place.
If you have any information regarding this case, please call the Paulding County Sheriff’s Office Crimes Against Children Division at (770) 445-6105.