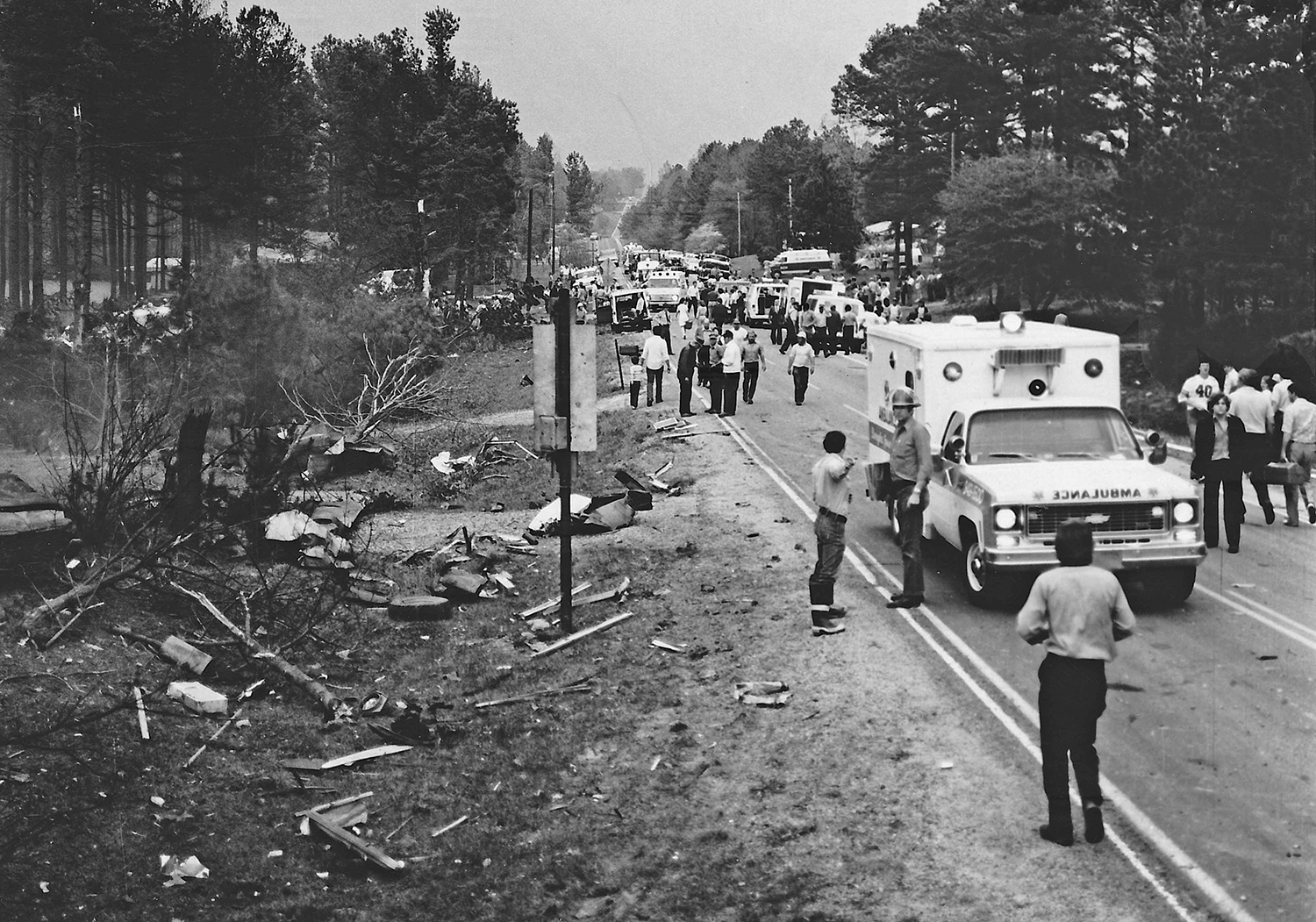 On April 4, 1977, a Southern Airways flight from Alabama to Atlanta encountered a severe hailstorm. The intensity of the storm overpowered both engines causing what is known as a flameout. Losing both engines the plane began rapidly to descend leaving the flight crew with no other option than an emergency landing, which was attempted on Highway 92 in New Hope Georgia. Though a valiant and nearly successful attempt to land was made, the resulting crash claimed the lives of 72 people, 9 of whom were people on the ground. Despite the horrific crash, 22 survivors were spared.
Through the pain and trauma, this disaster survivors and family members of those lost have marked the anniversary since the crash. In 2007 the New Hope Memorial Flight 242 was incorporated as a 501C3. Founder and President Cherry Waddell along with board members, personally affected by the crash, felt compelled to honor the anniversary and erect a permanent memorial in order to honor the victims and give peace to the survivors and family members of those that perished. 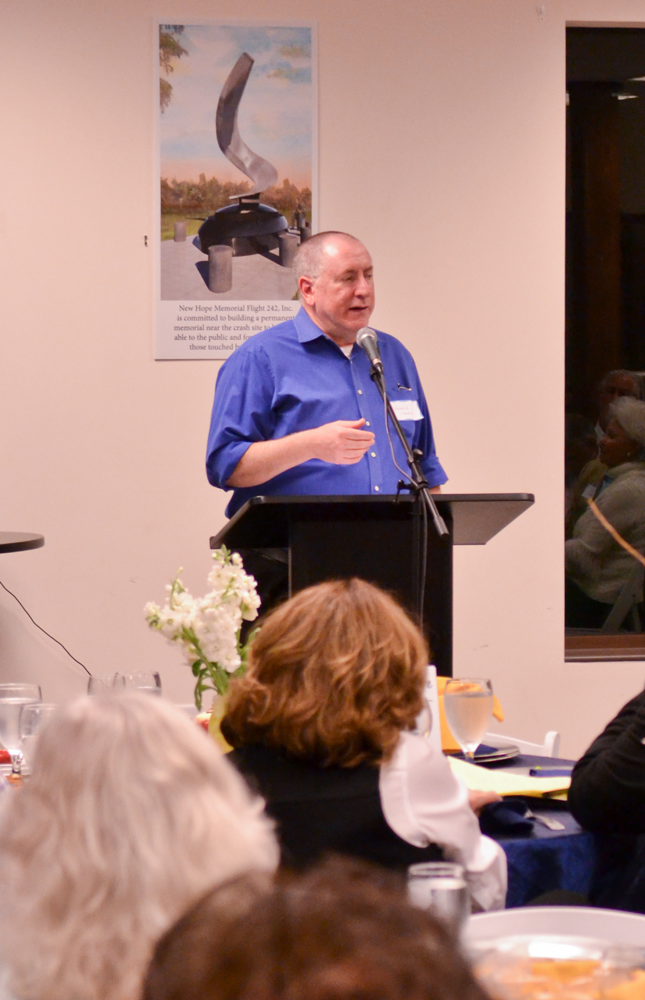 This April the 4th of 2019 marks the 42nd anniversary of the crash of Flight 242 and 12 years the board and its president have pursued the funds to complete the monument. During these years some board members have changed, save a few including who remained dedicated. In continuing to pursue the cause, while speaking at the Paulding Rotary Club, Mrs. Waddell persuaded local businessman and lifelong county resident Art Ragsdale to accept an active role in the story.
"In 1977, I was 19 years old and was working in heating and air-conditioning. That day I was under a house approximately a quarter mile from the accident installing some duct work. It was a new house, that no one was living in it at the time." Art recounted. "I remember the weather was terrible, and there I was lying flat on my back on this damp ground during a lightning storm. In those days the drills we used had cords. So I decided to call it a day before I got electrocuted. I remember gathering up the tools and driving home, which was no more than five minutes away. After I got home I remember my wife, Robin, was taking care of our first child Jason, who was just a baby at the time. I remember sitting down on the couch for just a few minutes. The TV was on and the news broke in and that's when we first heard about the plane crash." "Dallas is just a few miles away from New Hope. So, my wife and I got up to leave and go there. I remember that when I opened the front door I could hear sirens coming from all directions. I had never heard anything like that before. As we approached the accident site I could see people's faces who were coming from there. Their expressions, the look of shock on their faces made me stop and turn around. I knew we did not need to see that."
"You have to realize that Dallas was a very small town at that time and we were never mentioned on the news, ever. This crash was a big disaster, we were on the national news and we completely dominated the local stations" explained Art. 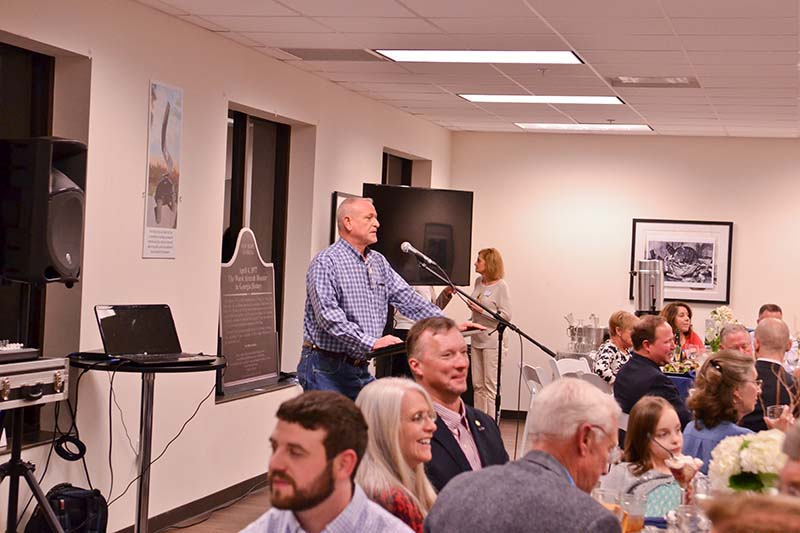 "Everyone in the town came together though, I remember my father having a meeting with other men from the First Baptist Church of Dallas to help at the crash site. My mother was a nurse at the Paulding Memorial Hospital and I don't remember her coming home that day, I believe she worked around the clock just as the other doctors and nurses did. They brought the survivors to the hospital, and from there they were transferred to other larger hospitals. It was like that for days, everyone was helping with the aftermath of this crash."
"It had a tremendous impact on the town and the county. But you might have a hard time defining the impact in a specific way. Everyone was affected. The people who were here then will never forget that day. Stories the families and the survivors are very powerful and heart-wrenching." Art said.
“When Cherry asked me to help see this project through I ultimately said yes. Cherry and I have been friends for a long time. I was not aware of the fundraising effort to build a monument. The thought of the effort and dedication that these people had put forth for years, it humbled me. What really convinced me was the fact that this was something that we could accomplish, and finish. Most charities are perpetual, but Flight 242 was different we had an end goal. And I believed the people here would come together and give so that we could accomplish this. So, I reached out to some friends in the Paulding Rotary and through them, we were able to take advantage of the Concert Series in Dallas last year, thanks to the City of Dallas and Robby Bruce, as a fundraising opportunity. This gave us some momentum. Raymond Phillips was one of the Rotary members that agreed to join with us and help see this through, and I promised him that we would get it done in one year. So after last year's concerts, we started planning a finale, a fundraiser that we could present to the people and reassure them that we would complete this." 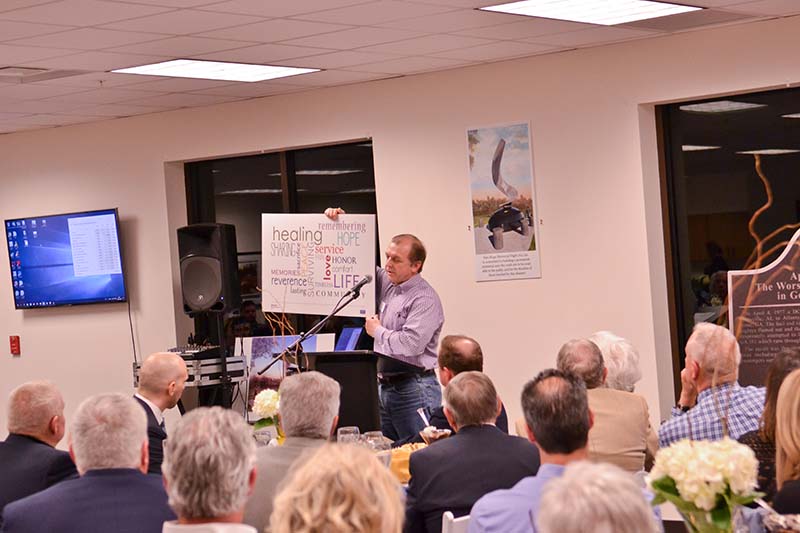 "As a team, we worked together on the details. The Paulding Airport donated the use of the facility for the event, which was great. As a board we all invited guests, Raymond and I went together and separately to people, friends, local businessmen, and local politicians to ask for their help. The response was tremendous!"
"The fundraiser was great! Many of the board members, survivors, family members came. Frederick Clemens, who was a survivor on the plane, gave a presentation. He explained what it was like to be on the plane that day. His story was moving and challenging for some to hear. We honored the memory. Beyond that, we had a really good time and were able to share in the hope that the monument represents. Jim Croft showed designs for and explained about the monument. There was a dessert auction, which was a lot of fun for everyone, and then we got down to the business of raising money, which is what we were there for. I am very pleased to let everyone know we did just that. First and last I believe we will have raised about $130,000 dollars. 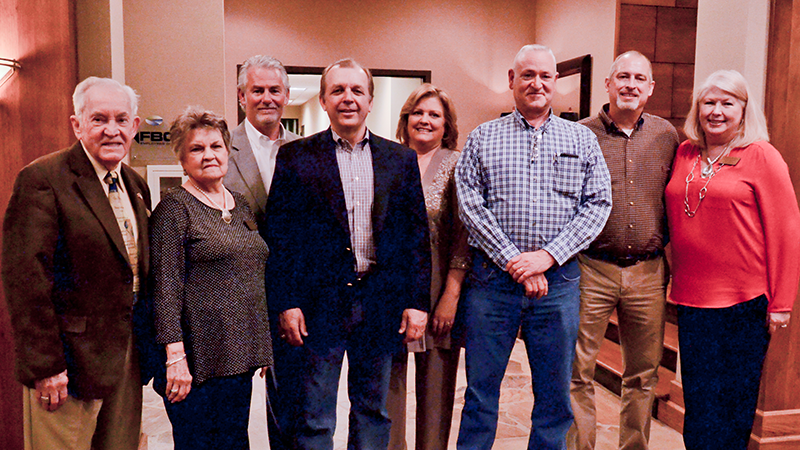 That with what we already had will see this thing through. Our board is now shifting its focus on to the actual physical construction project. We are close, but I won't feel like it is complete until I see the monument in the ground, finished." Art stated.
"I would like to give a special thanks to Cherry Waddell, Jabo Carter, Loran Wills, Sheilah Pickett, Hugh Walters, and other founding board members of the New Hope Memorial Flight 242 Inc. for the years of hard work and dedication to this cause." Art said in closing.

For those of you that wish to participate, it is not too late. Donations letter of emotion and thank you. Please make check payable and mail to:
NEW HOPE MEMORIAL FLIGHT 242, INC.
c\o Sheilah Pickett, Treasurer
5675 Old Cartersville Road
Dallas, GA 30132