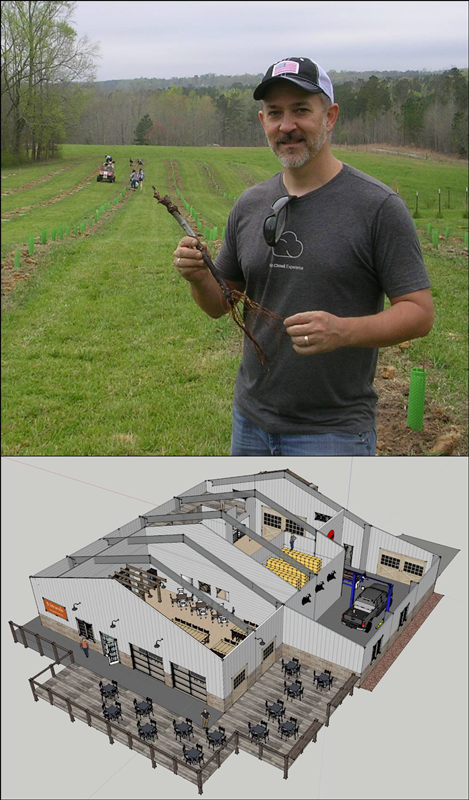 Places like California’s Napa Valley, Washington state or even wine country in France may be fun to visit, but Georgia has been becoming wine country too. And closer to home Paulding County will soon be the site of two vineyards, and the most recent is Three Strands Vineyard and Winery.
In 2016 The Gilbert family planted grapes on their picturesque northeast Paulding farm in anticipation of producing wine and offering tastings and tours of their Qualusi Vineyards by the following year. Three Strands Vineyard & Winery on Willow Springs Road in Dallas is in its planting stages. Earlier this month owner-operator, vintner Jason Summerour and family hosted a Saturday planting event. The vineyard is on 20-acres and about six are devoted to growing grapes, he said. The new crop being planted is an acre of (560) Blanc Dubois grapevines. The word ‘Blanc’ means ‘white’ in French, and these grapes will be used to make their first white wine vintage.
Prior to doing any planting Summerour has been doing his homework. “Starting in 2017 I did a tremendous amount of research and started talking to other vineyards in west Georgia,” he said. And he surrounds himself with people who, he says, “know more than I do about it.”
He recently hired a winemaker. She’s setting him up to make sure he has all the right stuff, so this fall he’ll have everything he needs to process the wine.
Wines the vineyard will strive to grow will be judiciously added based on their observable track record for growing, Summerour said. There is one new family of vines out of UC Davis that are said to be disease resistant, but he’ll monitor them for about the next year before he does any planting.
The vineyard is a family project, intended as a family venue and also something Summerour has wanted to do in his retirement. He comes from a farming background and loves the outdoors, but his working career couldn’t be farther from it.
Summerour says he’s “an engineer at heart” and leading engineering teams at Lockheed and later at the Weather Channel have afforded him the opportunity to begin building the vineyard with an eye toward retirement. Running the winery full-time is now maybe only a few more years away, he says.
And he likes the aspect of different types of experience it offers to his three children, from the farming side to the business end, he says. But with wineries now popping up within range of Atlanta’s metro area, the question might be, just what took so long for this to be happening? Summerour explains that Georgia was always wine county despite setbacks along the way agriculturally and otherwise that managed to derail and delay the state from ever really reaching its potential – until now. He cites a volume called “A History of Wine in America” as a great story that charts the obstacles and the breakthroughs along the way. “There is an awesome history here. Wine in the continental U.S. started along the east coast,” he said. “Georgia was actually funded as the 13th colony through a belief it would be good wine-growing country. The English had big dreams of growing wine grapes and producing silk in Georgia since it's roughly the same latitude as Europe, and they figured the climate would be perfect. But they weren't aware of Pierce and other disease-pressures in the Southeast,” he said.
Pierce's disease is caused when insects feed on a grapevine’s sap and spread a bacterium which can kill vines in as little as a year by blocking the movement of water. The key to overcoming that was in the development a hybrid vine that is resistant to disease pressure, Summerour said.
Then, years later, and adding to those challenges, prohibition hit. “Tens of thousands of acres of wine crop were dug up because of prohibition and it really hadn’t recovered until 20 or 30 years ago as growers at places like Chateau Elan in North Georgia and others began to reclaim Georgia as wine country,” he said.
In the next year, Summerour will put up a building devoted to the vineyard’s operations that are planned to be situated in the midst of the vineyard. There will be a winery, barrel tanks, equipment for fermenting and aging the wine, cold storage, a shop for working on vineyard equipment, an 1800 sq. foot tasting room area, and some outside serving area. Timeline on the completion of that and the official opening is for 2020.
But Summerour says the goal and marketing plan for Three Stands is not to place their wines at your local Kroger store.
“No, basically the idea here is that this is a smaller boutique winery and there are many aficionados that really like to go to vineyards and tasting rooms like this because they’re interested in the history and they just want to enjoy wines that are grown in Georgia.” Long term he’d like to build relationships and eventually see Georgia wineries link-up to offer wine fans a wine trail, not unlike other vineyard locales like Napa in California, he said. “It’s a long term vision, but there’s no reason that can’t happen,” he said.
Summerour also knows that eventually there may be requests to hold weddings or other private events at Three Stands and he’s not opposed to that, but initially, he says he wants to focus on establishing the vineyard.
“My passion is making really good wine; I’m going to master growing the grapes and the wine-making first.” 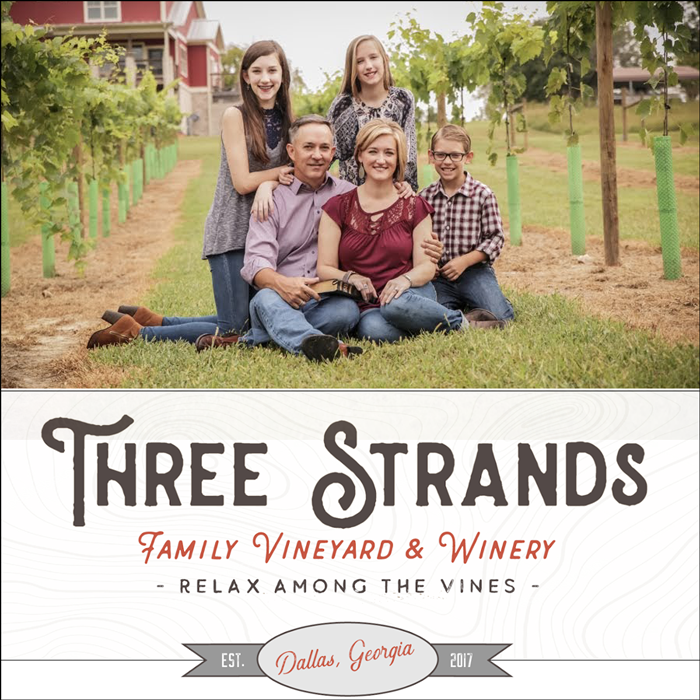