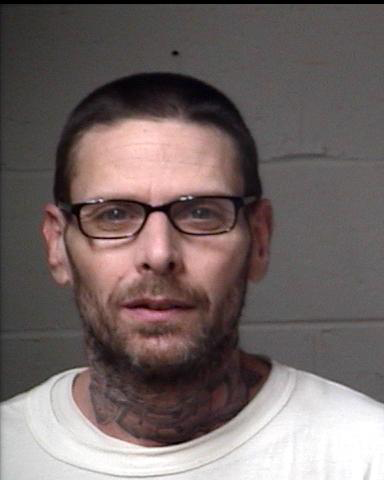 (Paulding County, GA) The Paulding County Sheriff’s Office, working in conjunction with the Atlanta Police Department Homicide Unit Cold Case Squad, the Paulding Judicial Circuit District Attorney’s Office, and the Federal Bureau of Investigation (FBI) Gang Task Force would like to announce the arrest of Andrew John Shadrix (W/M, 44 YOA) in reference to a 2002 double murder that was later determined to have occurred in Paulding County.
On September 15, 2002, in the early morning hours, the Atlanta Fire Department and Police Department responded to a vehicle fire on Interstate 20 which was just within the western city limits of Atlanta. Atlanta authorities quickly discovered that there was more to the vehicle fire than they expected. Two bodies were located in the trunk of the badly burned vehicle and a subsequent autopsy revealed that the two men had been shot to death. The victims were later identified as Shad Andrew English (W/M, 21 YOA), and Dennis Jeffrey Jackson (W/M, 19 YOA) both of Paulding County, Georgia. Although they diligently worked this case, Atlanta Homicide Detectives were never able to generate any substantial leads and the case eventually went cold.
For years there was speculation that the murders occurred in Paulding County but no conclusive evidence ever brought the investigation officially to Paulding County. As a result of some investigative leads that were developed in other cases, Paulding Deputies assigned to the FBI Gang Task Force along with Prosecutors from the Paulding Judicial Circuit District Attorney’s Office began working this case in early 2018. After an exhaustive amount of work, Deputies and Prosecutors were able to secure a confession on May 22, 2019, from the suspect, Andrew John Shadrix. During the course of the investigation, it was determined that the murders were drug related in nature.
As a result of the confession, it was determined that the murders occurred at 170 Cohran Store Road Douglasville, Georgia 30134 which is located in unincorporated Paulding County. It must be noted that this residence is no longer intact and was destroyed many years ago by the property owner for unrelated reasons. Shadrix, who is currently incarcerated in the Georgia State Prison system on unrelated charges, was in the Paulding County Jail for court proceedings in Paulding County when he confessed to the 2002 double murder.
Sheriff Gary Gulledge stated, “This is a case where perseverance paid off and a guilty conscience got the best of the suspect. We are glad the Jackson and English families will now have closure knowing that their sons’ murderer is in custody.” Shadrix is being housed in the Paulding County Jail without bond. He has been charged with two counts of Malice Murder (F) thus far. As the investigation continues, more charges are likely in this case.
If you have any additional information regarding this case or any other cold case murder, please call the Paulding County Sheriff’s Office at (770) 443-3010.