(Paulding County, GA) On Tuesday, November 12, 2019, Captain Robert Davis, of the Paulding County Sheriff’s Office Criminal Investigations Division, was awarded the Paulding County Board of Commissioners Public Safety Award. Captain Davis received this award for his dedicated service, innovative investigative techniques, and his diligence in keeping the Criminal Investigations Division in touch with current technology. Captain Davis’ 31-year career with the Paulding County Sheriff’s Office is a true testament to his exemplary record and dedication to the citizens of Paulding County.
Throughout his career, Captain Davis has always been at the forefront of keeping the Sheriff’s Office up to date with the most current crime-fighting technology. From his time as a Drug Task Force Agent to his role as a supervisor in the Criminal Investigations Division, Captain Davis has always strived to stay current. Most recently, Captain Davis has been working on efforts to organize and create a list of residences and businesses that have home surveillance systems in Paulding County. Once it is completed, it will be very helpful for Detectives when crimes occur because they can check the list and see if there is anyone in the area who may have a registered surveillance system.
Sheriff Gary Gulledge stated, “Robert has been with the Sheriff’s Office through four Sheriffs and has always been someone I can count on. His experience and expertise in the field of criminal investigations are unparalleled. We are thankful he cares so much about our county.”
Captain Davis was presented with a Certificate of Appreciation from the Board of Commissioners along with a “Dinner for Two” Gift Card from Texas Roadhouse. On hand to present the award was: Standing First Row (L-R): Colonel Chad Hunton, Lieutenant Mike Hill, Major Tom Murphy, Captain Robert Davis, Penny Davis (Robert’s Wife), and Sheriff Gary Gulledge. Standing rear row (L-R): Post 1 Commissioner Ron Davis, Post 2 Commissioner Sandy Kaecher, County Attorney Jayson Phillips, Commission Chairman Dave Carmichael, Post 3 Commissioner Chuck Hart, County Administrator Frank Baker and Post 4 Commissioner Brian Stover. Congratulations to Captain Davis and thank you to Texas Roadhouse for the generous donation of the gift card! 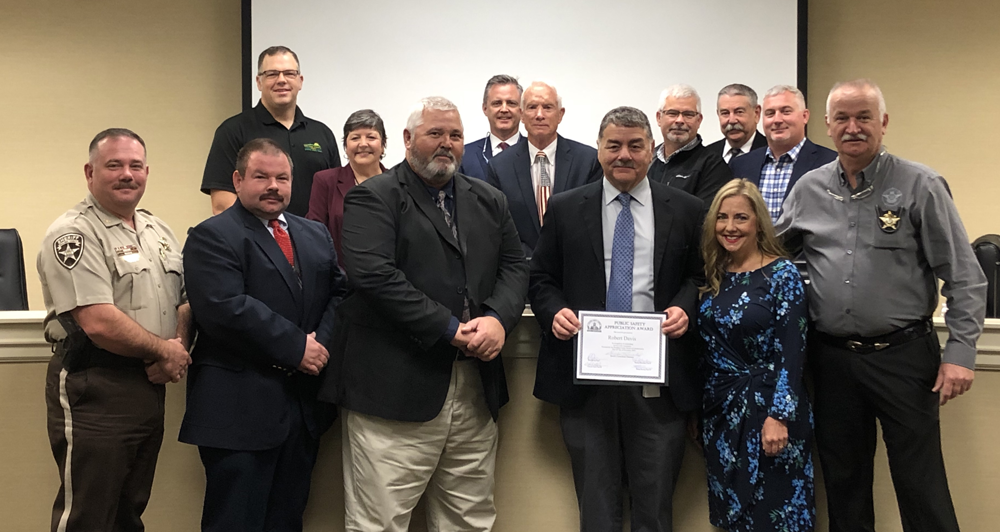