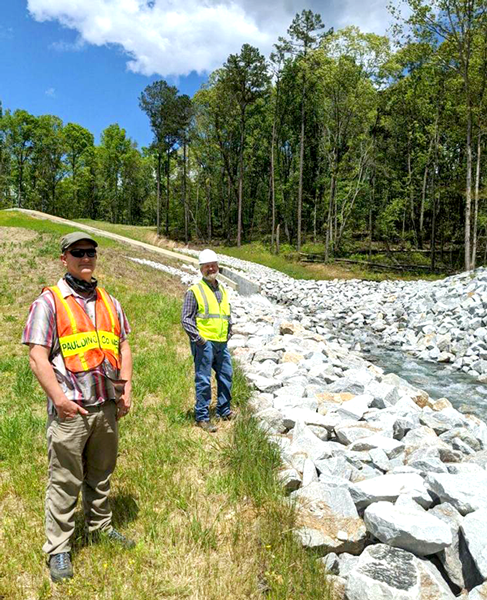 With the Richland Creek Reservoir (RCR) dam green-lighted earlier this month, the Etowah River Pump station is operational and water began flowing last week.
Water will fill to the first third as allowed by the Georgia Environmental Protection Division, a prescribed process that will take about a year to bring to full pool.
According to Brown and Caldwell’s Kelly Comstock, managing consultant on Paulding’s RCR project, contacted by phone, the process, which had been waiting for final approval after dam inspection had to be postponed more than once due to conflicting weather conditions, was given the go-ahead last week.
“So we’ve closed the outlet gate for the Reservoir...[and] we’re starting the fill process now. Chairman Carmichael came out and pushed the button to start the pumps up,” Comstock said.
“It sounded like a jet engine starting,” Chairman Carmichael said in describing the inaugural moment, who also spoke by phone. Carmichael is the fourth to serve as Paulding’s commission chairman since the plan was started to place a reservoir in Paulding County.
Comstock said that they expect water intake to reach the first third by about May 1st and then would continue at a rate of about two feet per week, he said.
Comstock acknowledged that COVID-19 safety plans had to be implemented to allow them to continue work during this period. Laurie Ashmore, Water Systems director noted in comments to the board in February that there will be a 30-day monitoring process during the treatment period done by the state along with Paulding County Water Systems before water is allowed to go into the county’s distribution system.
Comstock said another round of tours of RCR is planned in the future once social-distancing restrictions have been lifted.
The RCR is located on approximately 700-acres of county-owned land in northern Paulding County, in the Post 4 district.
The facility will provide 36 million gallons of water a day the county is projected to use. For more information visit www.rcrwater.com.