Paulding County’s Richland Creek Reservoir (RCR) is now – incrementally – in the process of taking in water and has reached the one-third level by the start of July. By 2021 the RCR will begin to function as the county’s primary water source far into the future.
The process of filling the reservoir is necessarily gradual, as allowed by the Georgia Environmental Protection Division, but will probably reach its ‘full pool’ stage by late fall, according to Brown and Caldwell Project Manager Kelly Comstock, who spoke by phone.
“We would probably be able to start treatment by the end of August,” Comstock said.
Ward Alexander, the assistant construction inspector with Brown and Caldwell, said that a few “punch list” items are being attended to currently, before the next 2-feet of water will be added.
Prior to the facility going online, some testing of both the plant functions and the water itself will need to be done, Alexander said.
The plant must run for a 30-day period without a glitch to pass muster, he said, and the water is monitored by both state and local officials during the treatment period before being allowed to go into the county’s distribution system.
With most buildings and other structures completed, most of the workforce that has been busy at the site since construction began have packed up and moved on.
Alexander explained that the reservoir is designed and set-up to be automated and will, for the most part, run itself, although some staff presence is required to monitor and troubleshoot, as needed.
The RCR has been targeted to begin providing water to the county in 2021. Paulding County has had an agreement with the Cobb-Marietta Water Authority.
Comstock also confirmed that the plan is to adjust down that water allotment to Paulding from Cobb-Marietta as the RCR becomes operational.
“The ultimate plan is that the county will work toward doing some additional distribution fixes in the south part of the county and that they’ll have a complete separation by 2032 – [that’s] the timeframe for that,” Comstock said.
The RCR is located on approximately 700-acres of county-owned land in northern Paulding County, in the Post 4 district.
The facility will provide 36 million gallons of water a day the county is projected to use. For more information visit www.rcrwater.com. 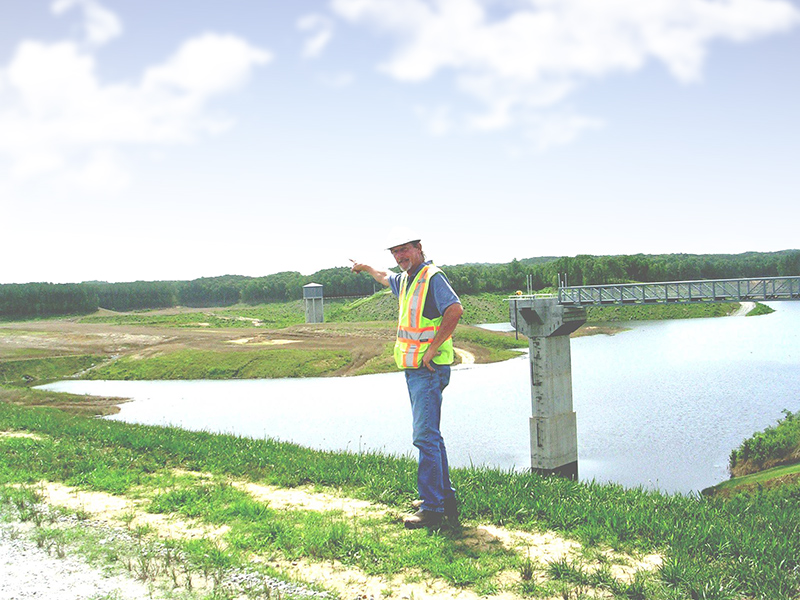 Ward Alexander, assistant construction inspector with Brown and Caldwell, at the reservoir's pool, indicates from where the water flows into the site. The next two-feet of water is expected to be added in July. (Photo: R. Grant)