(Paulding County, GA) On June 11, 2020, Paulding Deputies were dispatched to 195 Hillside Drive Dallas, GA to assist the Paulding County Fire Department with a residential structure fire where there was a person trapped inside the burning home. Multiple Deputies responded to the scene to assist Firefighters.
Once Deputies arrived, they quickly determined that the Firefighters needed some help. Some Deputies helped EMS personnel treat and care for victims, some Deputies assisted Firefighters with getting fire hoses ready, and other Deputies helped rescue an elderly bedridden female resident from the home.
When they realized that someone was still inside the home, Corporal Bryan Bonnett, Deputy Chad Myers, and Deputy Joshua Matthews knew that time was of the essence. Those Deputies immediately sprang into action to assist Firefighters who were already inside the burning home. Knowing that the fire was looming ever closer to the Firefighters and the victim who was inside the home, Corporal Bonnett, Deputy Myers, and Deputy Matthews began by helping to facilitate an escape route for the Firefighters and the victim because the other side of the home was fully involved with fire.
Deputies located a ladder that was behind the home and secured it against the window to help expedite a rescue of the victim. Corporal Bonnett, Deputy Myers, and Deputy Matthews all climbed a ladder, which got them extremely close to the fire and assisted Firefighters who were struggling to get the bedridden female out of the burning home. The fire, which was burning in the attic above the Firefighters inside the home, was extremely hot and superficially burnt the Deputies who were assisting. With the assistance of the Deputies, the Firefighters were able to eventually remove the elderly female from the burning home. Once she was removed, Deputies took her on a backboard to waiting for EMS personnel who were already on the scene.
Had it not been for the heroic efforts of the aforementioned individuals, the victim and possibly even the Firefighters might not have made it out alive. Corporal Bonnett, Deputy Myers, and Deputy Matthews were presented with the Medal of Merit award at the Paulding County Board of Commissioners meeting on Tuesday, July 28, 2020. In addition, multiple Firefighters were presented with awards that day as well for their heroic efforts.
By working together, the selfless acts of both our Deputies and the Paulding Firefighters that were involved that day helped saved the elderly female from imminent death. Because of their relentless effort and dedication, this Paulding County resident will live to see another day. It must be noted that the Medal of Merit award is an award given to a Deputy who puts themselves in imminent personal danger to save the life of another. Sheriff Gary Gulledge stated, “I am extremely proud of the way our Deputies responded to assist not only the elderly bedridden female but the Paulding County Firefighters who were also facing impending danger. We have such an outstanding public safety team in Paulding County and I am very proud to be a part of it”. 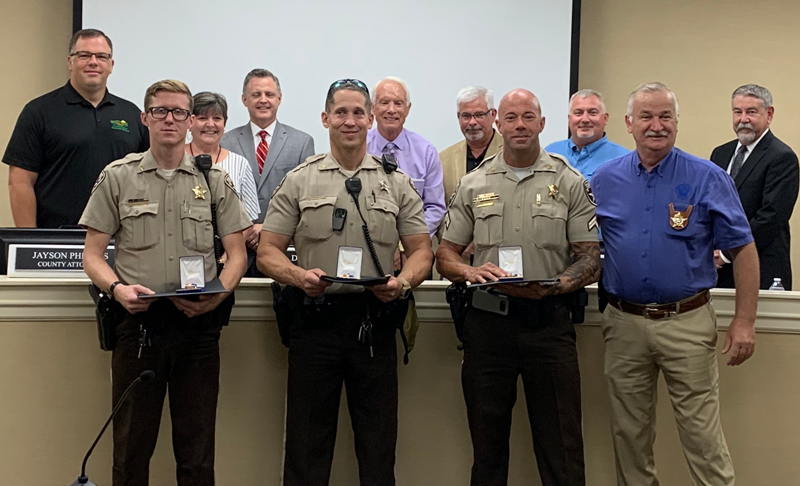