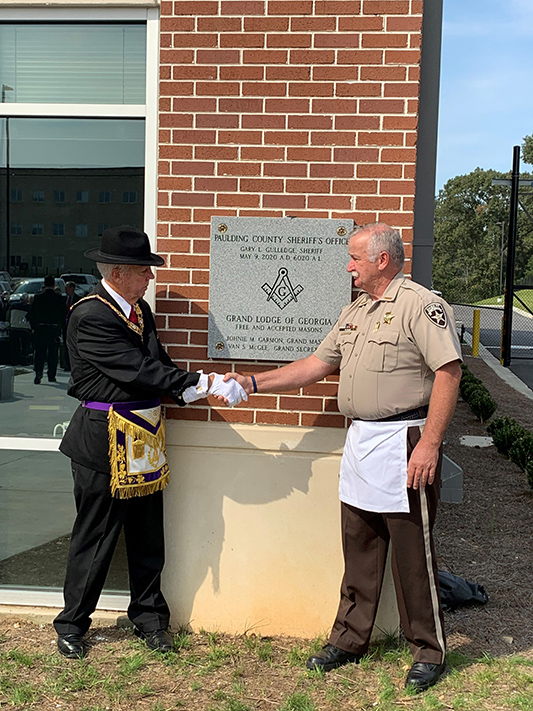 (Paulding County, GA) On Sunday, October 4, 2020, the Grand Lodge of Georgia, Free & Accepted Masons conducted a cornerstone ceremony at the new Paulding County Sheriff’s Office. Grand Master Johnie M. Garmon along with the Grand Lodge Officers facilitated an impressive and awe-inspiring ceremony.
A cornerstone ceremony is a time-honored tradition that Masons have conducted for many years on both public and other significant buildings in communities all around the world. The ceremony is a symbol of pride that local lodges and all Masons take in their communities. The process is still similar to the one used by President George Washington when he laid the cornerstone of our country’s capitol building in 1793.
The Officers of Dallas Lodge # 182 F&AM along with Deputies, community members, local elected officials, and Paulding County citizens were in attendance for the event. The event was originally scheduled to occur on May 9, 2020, just after the new Paulding County Sheriff’s Office opened, but the COVID-19 pandemic halted that. Nonetheless, the event was well attended and was very meaningful for those who were present.
We would like to give a special “Thank You” to Worshipful Brother Eddie Gurley for his help in making this event possible. Without his hard work and due diligence, none of this would have occurred. We would also like to thank Brother Bobby Hulsey and Brother Wesley Maulding of Affordable Monuments in Hiram, GA for making and donating the cornerstone to the Sheriff’s Office.