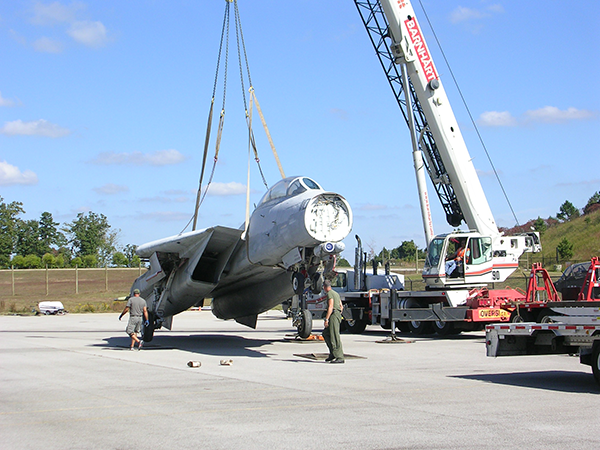 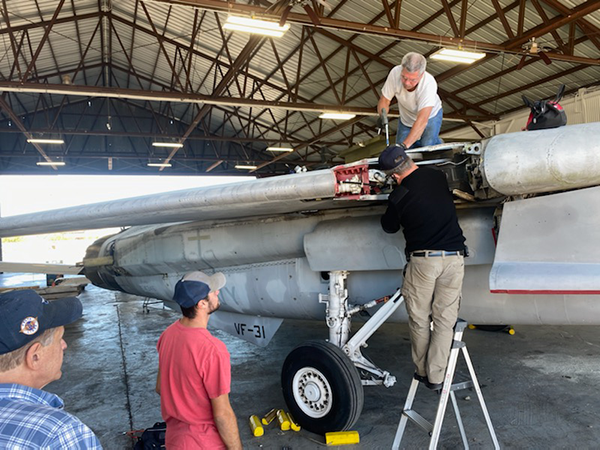 The Museum of Flight (MOF) made progress last week toward their move from Rome’s Richard B. Russell Regional Airport to the Paulding County airport.
The museum moved into their space in the Hangar 1 building and also last week moved the final piece of static inventory that will display outdoors. The final item, an F-14 Tomcat, is also the largest and it brings with it an interesting resume.
It was the last Tomcat to land on a carrier, was used in Desert Storm, and it was used in a movie called “The Final Countdown” that starred Kirk Douglas.
The largest plane is also a large draw for the museum.
Christine Lewis, MOF’s executive director said that pilots flying over the Rome airport would see the F-14 from the air and actually land and come see the plane.
The fuselage of the plane arrived at the Paulding airport last week on the back of a transport truck. The plane had been disassembled in Rome and was reassembled in Paulding over the next couple of days.
Pete O’Hare, MOF’s volunteer event coordinator and a volunteer pilot for the museum, was kept busy last week with the F-14 move. He is the great-nephew of Butch O’Hare, the namesake of the Chicago airport.
The first pieces of museum inventory moved to Paulding included one BTD1 Destroyer plane, a Russian cannon, a big-box truck, a Water Buffalo trailer, and a jeep. Plans are to add items to the MOF collection in the future.
The remainder of the MOF’s aircraft inventory to come over is operational and must be stored in a hangar.
According to Paulding Airport Director Terry Tibbitts, the start of construction on the MOF hangar depends now on fundraising. The site for the hangar is to the left of the terminal building and will take about a year to build.
Tibbitts indicated that the hangared plans in MOF’s inventory have a finite period of time to remain in their current location before they would need to be brought to Paulding’s airport.
Rome’s MOF began its move from the Richard B. Russell Regional Airport to Paulding earlier this year and will complete the move with the construction of the 12,000-square foot hangar, for which the steel has been donated by a MOF board member.
The museum will have a 20-year lease with two 10-year options, Tibbitts said, making Paulding its permanent home.