Paulding County’s Richland Creek Reservoir (RCR), the road to the county’s water source for future decades, as part of the final touches to construction of the facility will pave the entrance road into the 300-plus acre site.
During their March 9th regular session the Paulding Board of Commissioners approved a Bid Award for the milling, base prep, paving, and shoulder construction of the entrance road (off of Hwy 61) into the RCR to the lowest bidder Bartow Paving Co. in the amount of $289,298.36.
The entrance road leads into the main buildings and Water Treatment Plant area and paving will tie into existing paved lots that serve those buildings. Additionally, an added spur and small parking area on the property will be done at the same time.
The RCR facility is through construction and since last month has been involved in its testing phase and other preparatory stages before going operational and becoming Paulding County’s primary water source.
“We’re really in that check-out stage for the water plant and that’s very exciting that we’re now in that phase,” commented Paulding County Water System Director Laurie Ashmore, earlier this year. Ashmore said this phase continues with the end goal of demonstrating the ability to treat water.
The process of filling the reservoir is necessarily gradual, as allowed by the Georgia Environmental Protection Division, but will probably reach its ‘full pool’ stage by August, Ashmore said but added that the water level is sufficient for the testing phase to move forward.
The RCR project overall spans two decades and several sets of commissioners since it began with Bill Carruth, who also served as Paulding’s Chairman from 1996-2000.
The 305-acre RCR, located in the Post 4 district on approximately 700-acres of county-owned land in northern Paulding County, will provide 36 million gallons of water a day the county is projected to use.
And according to information on the RCR website, “it will store over three billion gallons of drinking water to supply to existing and future populations in Paulding County.”
Paulding County has had an ongoing agreement with the Cobb-Marietta Water Authority. Plans are to adjust down that water allotment to Paulding from Cobb-Marietta as the RCR becomes operational. The ultimate plan is that the county will work toward doing some additional distribution fixes in the south part of the county and have complete separation by 2032. 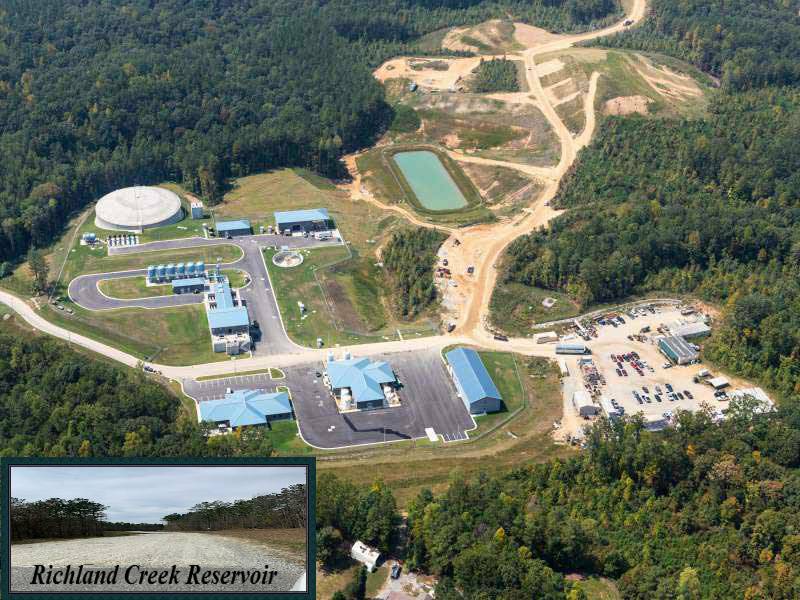 Paulding County Board of Commissioners recently approved a Bid Award for the paving and shoulder construction of the entrance road (off of Hwy 61) into the RCR. A portion of the entrance road is shown on the left side of the photo running through the facility and into a large parking area at the far right. That parking area is not included in the paving contract. (Photo: submitted, Paulding County Water System)