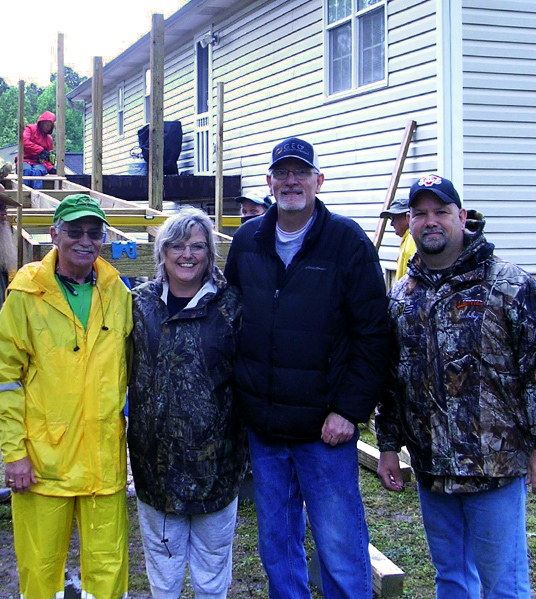 Back in 2014 one of the Methodist Youth Ministry’s River of Life program projects was to build wheelchair ramps. As of this week, Freedom Ramp Ministries’ 100th wheelchair ramp was built and installed at no cost to the homeowner.
Mike Eastman, who attends New Covenant United Methodist Church in Douglasville and helped build one of the River of Life wheelchair ramps, realized that they’re needed more often than just once a year. Eastman then stepped up to lead the Ramp Ministry at their church. The ramp team is usually comprised of members from Methodist, Baptist, Episcopal, Catholic, and Pentecostal Churches in surrounding counties.
In 2018 ramp number 59 was the team’s longest ramp to date at 125 ft. built-in Dallas for a woman with knee replacement complications. Without the wheelchair ramp, she couldn’t return to the home.
Eastman’s part of the ministry is going out to inspect the site, do project drawings, and figure materials. But, he says the real heroes are all the volunteers that show up to build a most rewarding project for people in need.
According to Eastman, the team’s most memorable ramp was done in Peachtree City where 39 volunteers representing nine separate churches showed up to build a 48 ft. ramp in four days.
“After many of our builds, the recipient would tell us that we gave them their freedom back. We had heard that several times from people,” Eastman said.
One of these occasions gave them the idea for the ministry’s name, he said.
Last Saturday about two dozen volunteers ignored the rain and overcast skies to show up at the home in Dallas and get ramp 100 completed. Work started at 8 a.m. and despite the dreary weather the 90-ft. ramp was on track to be completed by mid-afternoon.
The wheelchair ramp is designed to support itself even in the event it became unattached from the deck, Eastman said. And the ramp is installed with several prefabbed 8-ft. sections, a learned process that saves a significant amount of assembly time.
And whenever the ramp ceases to be needed at a given location, it can be dismantled, picked up, and assimilated into another ramp project. Just a nice way to pay it all forward, explained Sharon White, a pastor at Lindsey Chapel United Methodist Church in Cedartown, and the daughter-in-law of Saturday’s ramp recipient, Sandra White.
One recent install that was re-purposed from another site was only in service for about two weeks when the user passed away. Eventually, that ramp will be repurposed again at another site.
Building costs have increased since the pandemic began a year ago. Saturday’s ramp included some recycled materials but was mostly constructed from new lumber. The lumber cost to build this particular ramp was about $2,200, out of donations.
And volunteers would take one break. Hudson’s Hickory House Barbeque in Douglasville contributed lunch for all the volunteers. And they’re always open to new volunteers.
“If you have helped in the past or want to now, we need you. If you can't help with the build, maybe consider a financial donation. Any amount will help,” according to Janis Woods, Eastman’s sister.
Donations can be sent to New Covenant United Methodist Church at 5960 Hwy 5, Douglasville Ga. 30135 and designated: “Walker Ramp.” And for more information on how to help, contact Mike Eastman at or Janis Woods at