(Paulding County, GA) On Tuesday, November 9, 2021, Deputy Bruce Brott, who works in the Uniform Patrol Division at the Paulding County Sheriff’s Office, was awarded the Paulding County Board of Commissioner’s Public Safety Award. Deputy Brott was awarded the Commissioner’s Public Safety Award for his exemplary service to the Paulding County Sheriff’s Office. Deputy Brott has been employed with the Paulding County Sheriff’s Office for over two years and has been in law enforcement for seven years.
In addition to his exemplary service as a Deputy in the Uniform Patrol Division, Deputy Brott has been an integral part of the build and design team which implemented our new Jail and Records Management software system. Several employees wrote letters recognizing Deputy Brott for his hard work and dedication to the Sheriff’s Office but especially recognized him for his hard work on our software transition. Sheriff Gulledge remarked, “Bruce came to us from another agency and had previous experience with the software system that we are implementing. He was a vital part of the software transition and helped teach other Deputies the system. We are extremely proud of the job that he does for the Sheriff’s Office and the citizens of Paulding County.”
Deputy Brott was presented with a Certificate of Appreciation from the Board of Commissioners along with a “Dinner for Two” Gift Card from Texas Roadhouse. Congratulations to Deputy Brott and thank you to Texas Roadhouse for the generous donation of the gift card! Pictured in the image are the front row: Sergeant Mike Quinn (Brott’s Supervisor), Major David Pace, Deputy Bruce Brott, and Sheriff Gary Gulledge. Second row: Keith Dunn (Post I Commissioner), Sandy Kaecher (Post II Commissioner), Jayson Phillips (County Attorney), Dave Carmichael (Commission Chairman), Frank Baker (County Administrator), and Chuck Hart (Post III Commissioner). 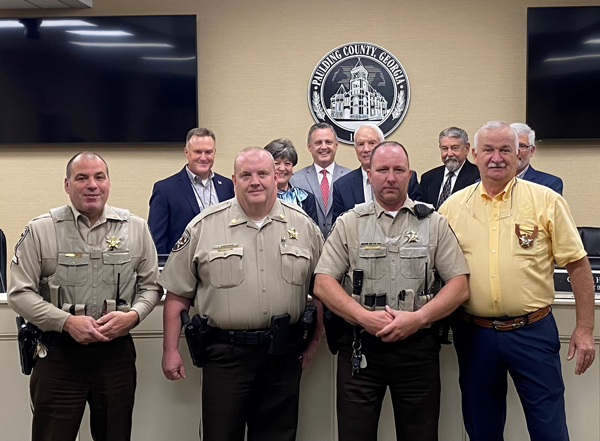