Bryson Elzey of Dallas is only seven years old, but he’s already got the heart of a warrior. At the age of eight months old, on August 31, 2008, Bryson spent a long night in two emergency rooms where a CT scan revealed that a bleed on his brain was caused by a tumor. He was immediately life-flighted to a children’s hospital where a procedure was performed to relieve the pressure on his brain until the tumor could be removed. On September 2, 2008, an 85% resection of the tumor was successful. Bryson was diagnosed with a Glioblastoma Multiforme Grade IV brain tumor (GBM) and was given a two-year chemo treatment plan to prevent the tumor from growing and coming back. Due to his diagnosis and treatment, Bryson suffers from hemiparesis on the left side which has caused him to be unable to walk or use his left hand/arm and requires him to use a wheelchair for mobility. Bryson also has hearing loss, epilepsy (ESES), cognitive delays, feeding difficulties which require him to use a G-tube, and hydrocephalus for which he has a shunt. Bryson also suffered a stroke in June 2011. Since September 2008 Bryson has endured 12 surgeries related to his diagnosis, hundreds of CT scans, MRIs and X-rays and he also completed two years of chemotherapy. He continues to go to therapy several times each week and gets regular MRIs and follow- ups with all of his specialists. Through it all, Bryson’s vitality and zest for life has been unshakeable. He is known for his mega-watt smile and his happy disposition. He is truly a valiant warrior and has overcome obstacles, all while maintaining faith and hope. 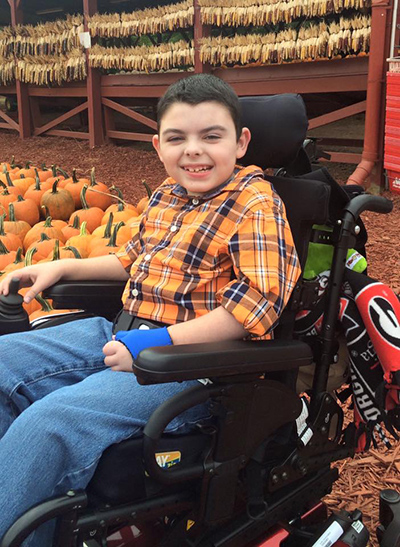 Bryson’s family is participating in Starry Night Atlanta on Saturday, November 7, 2015. This is an 8.5K event at Centennial Olympic Park in Atlanta that benefits the Pediatric Brain Tumor Foundation – Georgia Chapter. (www.curethekids.org/ga) Bryson’s mother, Tiffany, has formed a team in his honor called “Bryson’s Bunch”. A fundraising event will be held at Chick-Fil-A Hiram, 4326 Jimmy Lee Smith Pkwy, on Thursday, October 15, from 5:00-8:00pm. Come out and enjoy some delicious food and support “Bryson’s Bunch” by signing in at Chick-Fil-A Hiram during the event hours. A portion of the evening’s proceeds will be donated to “Bryson’s Bunch” Starry Night Atlanta Team. To make a donation to Bryson’s team, visit: http://pbtf.convio.net/site/TR/2015StarryNight/General?pg=team&fr_id=2293&team_id=9230