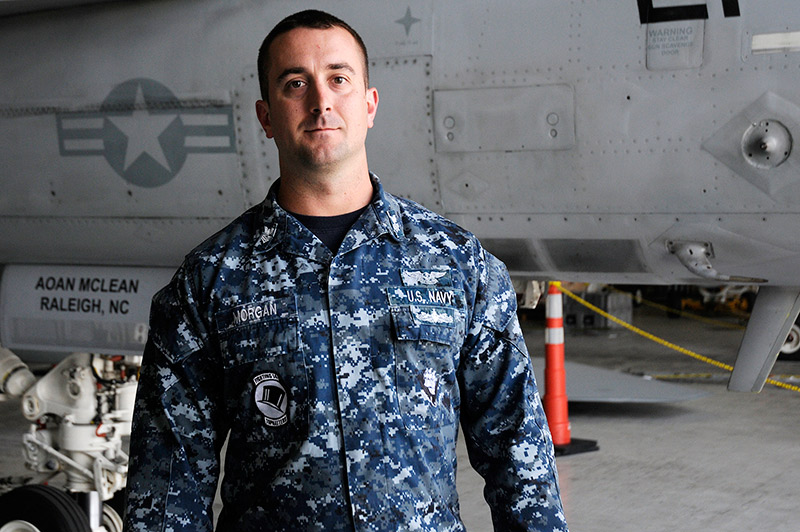 LEMOORE, Calif. – A 2001 Paulding County High School graduate and Dallas, Georgia native is currently serving with the U.S. Navy’s Strike Fighter Squadron Fourteen, also known as the “Tophatters”, at Naval Air Station Lemoore in California.
Petty Officer 1st Class Christopher Morgan is an aviation ordnanceman with the squadron, which the Navy designates as VFA-14, and works with the Navy’s most lethal and versatile strike fighter aircraft, the F/A-18E Super Hornet.
“I perform scheduled and unscheduled maintenance on FA-18E Super Hornets,” said Morgan.
The Super Hornet takes off from and lands on Navy aircraft carriers and is capable of conducting air-to-air combat as well as air-to-surface combat. It is approximately 61 feet long, has a max loaded weight of 66,000 lbs., and a max speed of 1,190 miles per hour.
Operating from the sea aboard aircraft carriers, the Super Hornet gives the Navy the power to protect America’s interests anywhere, at any time. The versatile jet has the ability to destroy targets located hundreds of miles inland, without the need to get another country’s permission to operate within its borders.
“I like the high tempo of the operations in the squadron,” said Morgan.
Morgan said he is proud of the work he is doing as part of the squadron’s 217-member team, helping to protect America on the world’s oceans.
“My job contributes to the overall success of the aircrew,” said Morgan.
Sailors’ jobs are highly varied in VFA-14. Approximately 24 officers and 193 enlisted men and women make up and keep all parts of the squadron running smoothly — this includes everything from maintaining aircraft airframes and engines, to processing paperwork, handling weaponry, and flying the aircraft.
“VFA-14 is made up of a group of hardworking and skilled individuals whom work exceptionally well together,” said Cmdr. Tommy Locke, VFA-14’s commanding officer. “Being a part of a squadron with as much history as VFA-14 instills a lot of pride and honor in our team and in the work we do. Everyone knows their job and what is expected of them to complete our mission.”
The Tophatters are the Navy’s oldest active squadron, having formed in 1919. Since the squadron’s inception they have flown 23 different types of aircraft, changed designations 14 times, and operated from 20 different aircraft carriers.
“The chance to travel and the camaraderie are the best things about working in the Navy,” said Morgan. 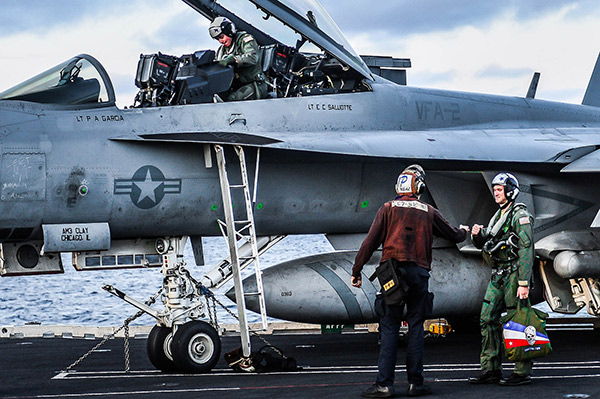 "Why Being There Matters"

On our planet, more than 70 percent of which is covered by water, being there means having the ability to act from the sea. The Navy is uniquely positioned to be there; the world's oceans give the Navy the power to protect America's interests anywhere, and at any time. Your Navy protects and defends America on the world's oceans. Navy ships, submarines, aircraft and, most importantly, tens of thousands of America's finest young men and women are deployed around the world doing just that. They are there now. They will be there when we are sleeping tonight. They will be there every Saturday, Sunday and holiday this year. They are there around the clock, far from our shores, defending America at all times.

Thank you very much for your support of the men and women in U.S. Navy, deployed around the clock and ready to protect and defend America on the world's oceans.