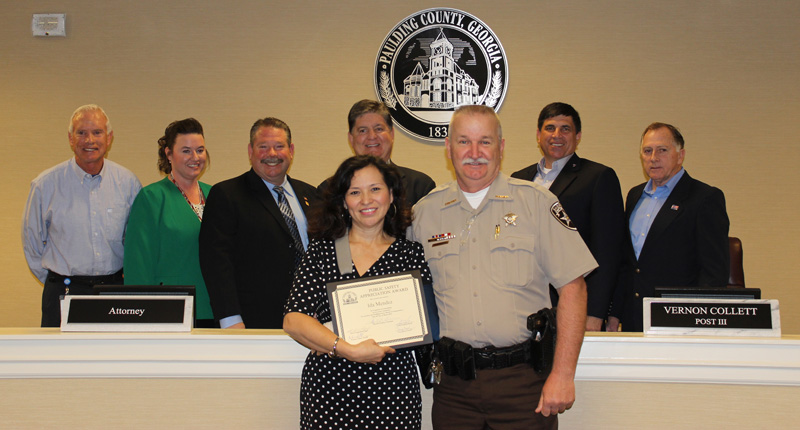 (Paulding County, GA) On March 10, 2015 Mrs. Ida Mendez of the Paulding County Sheriff’s Office was awarded the Paulding County Board of Commissioner’s Public Safety Award. Mrs. Mendez was awarded the Commissioner’s Public Safety Award for her exemplary customer service to the citizens of Paulding County and her relentless work ethic. “Mrs. Ida” as she is affectionately known at the Sheriff’s Office, is a member of the civilian staff and is likely one of the first faces a citizen sees when they enter the lobby. Recently, when Corporal Sam Driskell and his family passed away, Mrs. Mendez was an integral part of the preparation for the funeral services. Since Mrs. Mendez is bilingual she was able to speak with the family of Mrs. Driskell who lives in the Dominican Republic. Mrs. Mendez also helped coordinate funeral arrangements with Mrs. Driskell’s family utilizing her bilingual skills. Sheriff Gary Gulledge stated, “If it weren’t for Mrs. Ida, there is no way we could have made all of the arrangements for the funeral of Mrs. Driskell. She has been an integral part of this office since she was hired in May of 2005”.