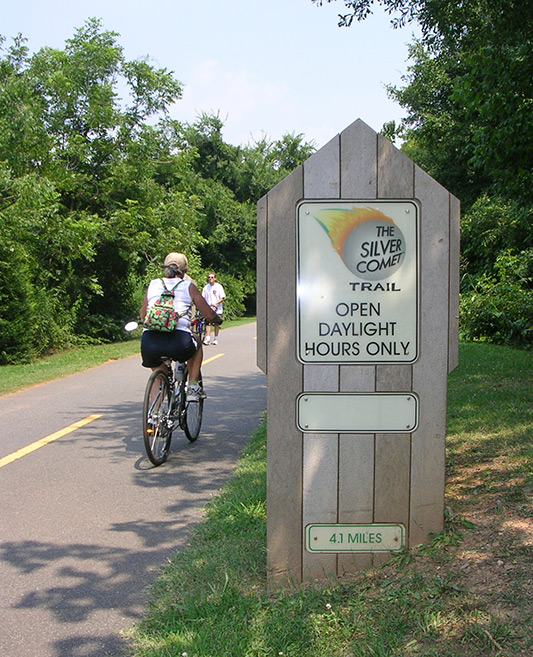 After the attack on Paulding resident Tina Waddell, who was brutally beaten and found by a cyclist on the trail in July, county officials have been working to make the trail safer by carrying out a plan to install 47 cameras in 21 locations along a seven-mile stretch from Seaboard Avenue in Hiram to Seaboard Avenue in Dallas.
Prior to this addition, there were only four locations that had security cameras and they were located at the existing trailheads between Hiram and Dallas,” said Will Lyons, county information technology director. “These locations were installed almost 10 years ago by the IT Department.”
Lyons said 16 cameras are in operation and most of the remaining 31 will be installed within coming weeks.
This is a major upgrade from the existing camera system in place on the trail, which county officials consider Paulding’s top tourist draw.
Paulding County Sheriff’s Department spokesman Cpl. Ashley Henson said the cameras can be monitored by the three deputies who patrol the trail full-time. They are slated to receive electronic tablets to view images from the cameras in real time within the next week or so.
So far, the sheriff’s department has not had to tap into the cameras’ data for any crime-solving or ticket-writing, although they could be used for that in the future.
The two major incidents on the trail have been the Waddell case and the 2006 beating death of trail cyclist Jennifer Ewing. No suspects have been identified in the Waddell case. Michael Ledford, who lived near the trail, was convicted of Ewing’s murder and sentenced to death in 2009.
In addition to the cameras, the sheriff’s department also has three Smart Cars to patrol the trail, which is a step up from the single Smart Car used prior to the Waddell incident.
The effort represents an extensive collaboration of many county departments, which was spearheaded by former county administrator Mike Jones, Lyons said. “[Jones] played a large role by putting the teams together and acting as the liaison between the departments and the commissioners, as well as requesting funding,” Lyons said.
All told, the county has spent $243,000 to increase security on the trail, all of which has come from the parks and recreation department’s portion of Special Purpose Local Option Sales Tax funds. The total budget for the installation is $350,000.
The 47 cameras are part of a planned first phase of installation. A second phase to add additional cameras is planned along less-traveled segments east of Hiram and west of Dallas. The cost will be determined in the future, Lyons said. Now with the system in place all the departments will work together to keep the system operational and maintain the best visibility, safety and appearance,”