The Paulding Chamber of Commerce hosted Kennesaw State University Professor of Economics Roger Tutterow at last week’s April Chamber Luncheon in Dallas. Dr. Tutterow told Paulding business leaders last week that a key indicator that the economy is headed in the right direction comes recently from the trend in labor markets. “We are taking labor markets from a recovery mode to an expansion mode and that’s good news,” he said. 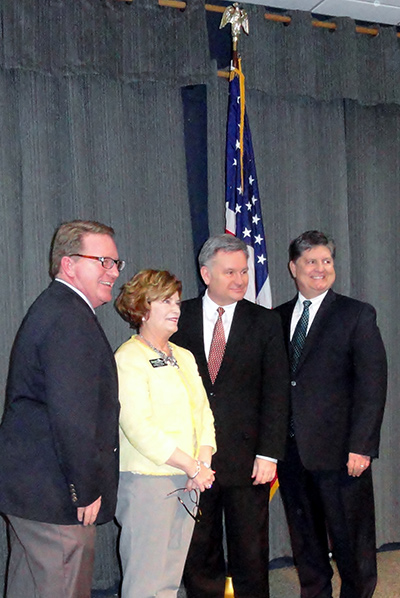 Closer to home Tutterow said that state losses in housing construction made local suffering especially difficult over the last few years.
But Tutterow said that oil prices and the factors that have brought them down will stay in place for a while, which will stimulate economic growth. Locally, a major airport hub and longer commute times make lower fuel prices ‘bullish’ for the local economy, he explained. By the end of next year the prime rate will raise to only about 6 percent, he said. “No business in this room should be concerned about a prime rate of 6 percent,” he said.
Tutterow commented that about one third of banks in the state closed during the six-year economic downturn, but currently banks are doing well, he said. He said part of the reason for closings was that Georgia seemed to have more than its share of banks compared with many other states. And Tutterow said that Paulding may bode well with the growing pool of aging baby boomers who seek senior housing and desire to locate in proximity to good health care, educational opportunities, good transportation, close to grandchildren, and to reside in a warm climate.
Turning to political influences Tutterow said that most changes with Obamacare may come within the regulatory environment, he said. At the state level, Tutterow said that with the wrap-up of the current legislative session, the state budget of 22 billion reflects economic recovery.
“Finally we are a point now in real terms where the inflation-adjusted state budget is above where it was prior to the regular session; finally the guys in the general assembly and the governor’s office feel like they’ve got the financing to support some initiatives,” he said.
In his closing remarks last week Tutterow said that as the county matures and continues to grow Paulding should focus on bringing manufacturing businesses that produce and export outside of the county as means to create wealth.
In addition to his academic positions, Tutterow is often interviewed in numerous local and national media outlets. He also serves as a consultant on financial economics and statistical modeling for corporate clients ranging from Fortune 500 companies to closely held businesses.
Upon his move back to KSU, Kathy Schwaig, dean of the Coles College of Business, was delighted to welcome Tutterow back to KSU. “Roger’s expertise in financial economics and statistical modeling is known throughout the state and nation, and we are proud to have him once again,” she said.
Tutterow also serves as the chief economic adviser for the Henssler Financial Group, an Atlanta-based financial services firm. He is a frequent guest on the speaker circuit, appearing before groups in 23 states and talking on a variety of business, economic and political topics.
In 2003, Gov. Sonny Perdue appointed him to serve on the Governor’s Council of Economic Advisors, a role he continues under Gov. Nathan Deal.
In 2010, Tutterow was named to the Special Council on Tax Reform and Fairness for Georgians, where he got to know A.D. Frazier, the former chief operating officer for the Atlanta Committee for the Olympic Games, who was serving as chairman.
“Roger is an asset to the state. He believes in what we are doing,” Frazier said. “He’s a first-class academic; he’s a first-class speaker; and he works his bananas off. He is tickled to be back at Kennesaw. And he’s as happy he’s been in the four years I’ve known him.”