Francine Thompson, a local Blue Star Mother, a title commonly given to a mother with a child actively serving in the United States Military, is collecting supplies for deployed service members. Back in 2004, while living in Florida, Ms. Thompson’s son, United States Army Staff Sergeant Shane Johnson was sent on the first of his five deployments overseas. Staff Sergeant Johnson is a Military Police Officer in a Canine Unit based out of Fort Gordon. He currently has fourteen years of service.
During her son’s first deployment, Ms. Thompson felt the need to do something for the deployed troops. Shortly thereafter, she joined Forgotten Soldiers Outreach, an organization that sent care packages and letters of encouragement to deployed soldiers overseas.
Now living in Georgia, with her son recently on his fifth deployment, Ms. Thompson wanted to send service members items that they might not be able to purchase or have available overseas as well as some comfort items.
Armed with a mother’s determination, patriotically decorated collection boxes, flyers and event notices on Facebook, Ms. Thompson got to work. An officer in The American Legion Ladies Auxiliary, Unit 111 in Dallas, she assembled a crew of family, friends and volunteers from the American Legion family to help.
Soon the word was out that items were needed for military care packages. Examples of the types of items sought were small travel sized toiletry items, individually packaged food items, books, magazines, writing paper, envelopes and the like. Cards, letters and notes to service members were also welcomed. 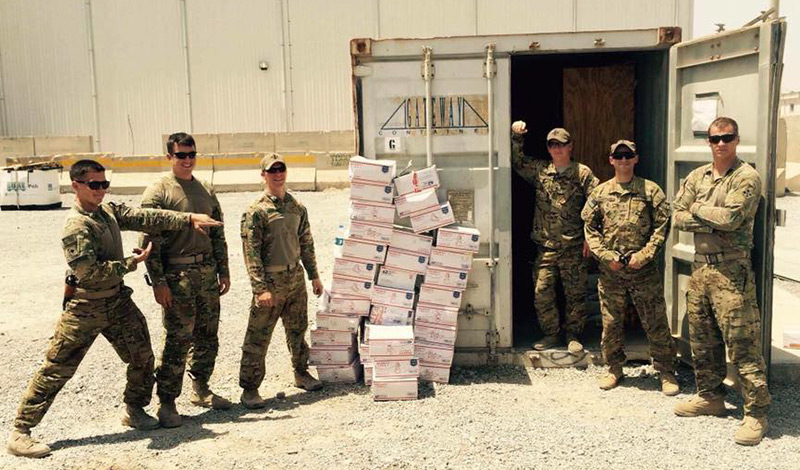 Photo Captions: Group Picture: Pictured above some of the members of the American Legion family of Post 111 in Dallas with Blue Star Mother, Francine Thompson, fourth from the right after packing boxes for U.S. Military members deployed overseas.