The American Legion Ladies Auxiliary, Unit 111, in Dallas, Georgia, assisted by members of the Post 111 family consisting of the American Legion, Sons of the American Legion and the American Legion Riders, hosted their 2nd Annual Gold Star Mother’s and Families luncheon on Sunday, September 25, 2016.
The origin of the term “Gold Star” can be traced back to World War I where it became practice for families with those serving in the military to place a service flag in a visible window of their home. The flags, which hang vertically, have a white rectangular center surrounded by a thick red border. In the center of the white area, a blue star was displayed for each member of the household that was serving in the military. If the service member died during service, their blue star was replaced with a gold star, hence giving birth to the terms “Gold Star Mother” and “Gold Star Family.” 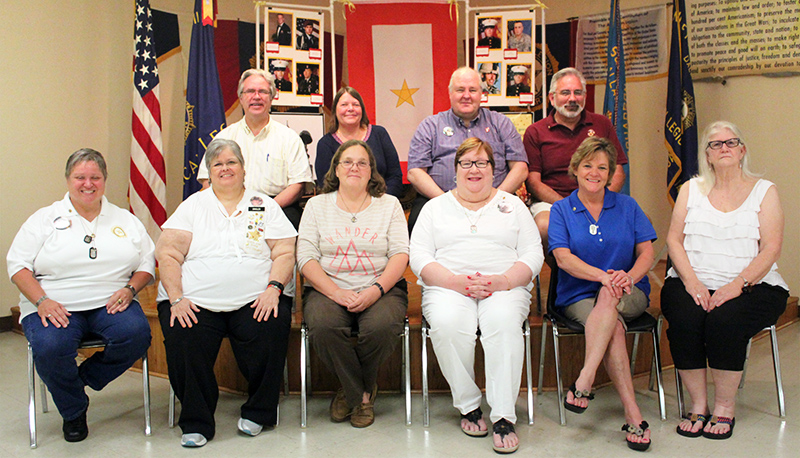 On June 23, 1936, the United States Congress, via Senate Joint Resolution 115, 49 Stat. 1985 as amended, designated the last Sunday in September as "Gold Star Mother's Day." Since September 23, 2011, by Presidential Proclamation, the day has been known as “Gold Star Mother’s and Family’s Day.” This year’s Presidential Proclamation for Gold Star Mother’s and Family’s Day, published on September 25, 2016, stated that “less than one percent of our Nation wear the uniform, but all of us have an obligation to acknowledge the losses endured by Gold Star Mothers and Families and to fill the painful absence of their loved ones with our profound gratitude. We must strive to support these families -- not just with words, but with actions -- by being there every day for the parents, spouses, and children who feel the weight of their loss. On this day of remembrance, may we carry forward the work of those who gave their last full measure of devotion and vow to keep their memories burning bright in our hearts. And may we lift up their families, who have steadfastly supported their mission through immeasurable heartbreak.”
In this spirit of gratefulness and support to our local Gold Star families, a special day was planned for them. The families gathered together and were escorted to Post 111 by the American Legion Riders. This year, Gold Star Mother, Cathy Wells, mother of USMC Lance Corporal Squire Kimpton P. “Skip” Wells, took part in the escort and rode her trike, adorned with both U.S. and Gold Star flags. Other families in attendance included Lisa and Don Brown, parents of Senior Airman Donald H. “Trey” Brown III, Reverend Tommy and Karen Dingler, parents of Army Specialist, Joshua P. Dingler, Claire and Jason Estopinal, parents of USMC Private First Class, Jason Hill “JJ” Estopinal, and the family of Army Specialist Ryan C. King, including his mother, Candice King, her partner, Sandra Moore and grandmother, Nancy Roberts. Those unable to attend were the families of Army Sergeant Michael C. Hardegree, USMC Lance Corporal Scott D. “Boots” Harper and Army Sergeant First Class and Congressional Medal of Honor Recipient, Paul R. Smith.
Members of the American Legion family have stated that it was both “an honor” and “a privilege” to provide a luncheon and spend an afternoon with these “wonderful” Gold Star families. Also in attendance, as special guests of honor, were Mr. James “Jim” Stockton, USMC veteran and Iwo Jima survivor and Mr. Henry Woodall, a Vietnam Army veteran, who along with his wife Deborah, made a beautiful and delicious homemade cake replicating the design of a Gold Star flag.
If members of the public know or encounter any Gold Star families, please be sure to thank them and show your support. They have sacrificed so much and we can never thank them enough. If there are any additional Gold Star families that would like to attend the 2017 luncheon, please email or write to the American Legion Auxiliary, at Post Office Box 1951, Dallas, GA 30132.