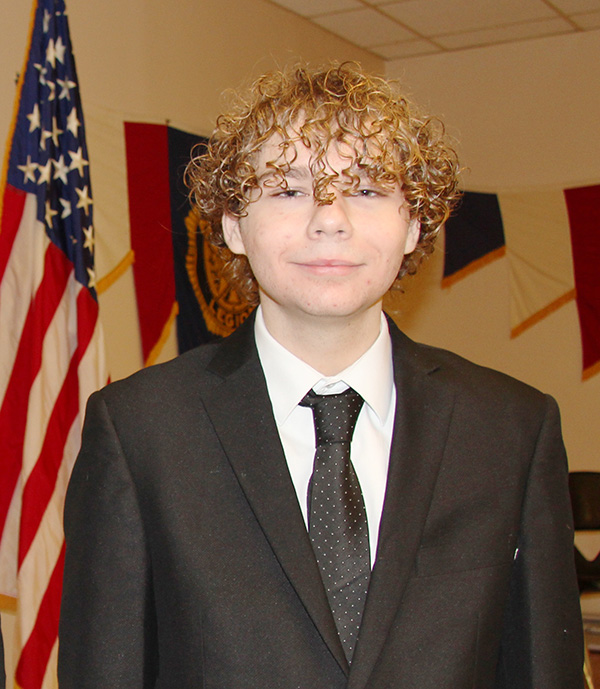 Walter S. Burger, a Junior from Paulding County High School in Dallas, GA, was named the winner of American Legion Post 111’s 2018 Constitutional Speech Contest on January 20th. Mr. Burger earned a Certificate of Distinction, U.S. Navy Challenge coin, and a $300 cash award. He will now advance to the District level competition to be held on February 3, 2018, starting at 1:00 PM, at American Legion Post 304, 4220 S. Main Street, Acworth, GA, 30101.
Part of the American Legion’s National "High School Oratorical Scholarship Program”, each contestant delivered a prepared eight to ten-minute speech on “the U.S. Constitution, with some emphasis on the duties and obligations of citizens to our government.” Mr. Burger’s prepared speech was “The Importance of Unity.” Next, the contestants were given a randomly assigned topic pertaining to specific Articles and/or Amendments from the U.S. Constitution and had to deliver a three to five-minute speech based on their assigned topic.
Kevin Volk, a Sophomore from Paulding County High School finished in second place and Kasie Cochran, a Senior from Hiram High School placed third. Each earned Certificates of Participation, a U.S. Navy Challenge Coin and a $200 and $100 cash award, respectively.
It was a very close and difficult contest to judge. American Legion Post 111 would like to thank our distinguished panel of judges, Ms. Nancy Childers, Mr. Ricky Clemmons, The Honorable William (Bill) Foster III, Mr. Sammy McClure and Ms. Harriet Ruff for volunteering their time and their contributions to the day.
Since 1938, The American Legion “High School Oratorical Scholarship Program” has encouraged the nation's high school students to study the U.S. Constitution and to hone their public speaking skills. We encourage students to sign up for next year's contest. Public, private and home-schooled students between the ages of 13 to 20, grades 9 through 12 who are U.S. citizens or legal residents of the United States are eligible to enter. Full contest details and can be found at www.legion.org/oratorical or contact the Post 111 Oratorical Chair, David Altwies at or (678)363-0349.