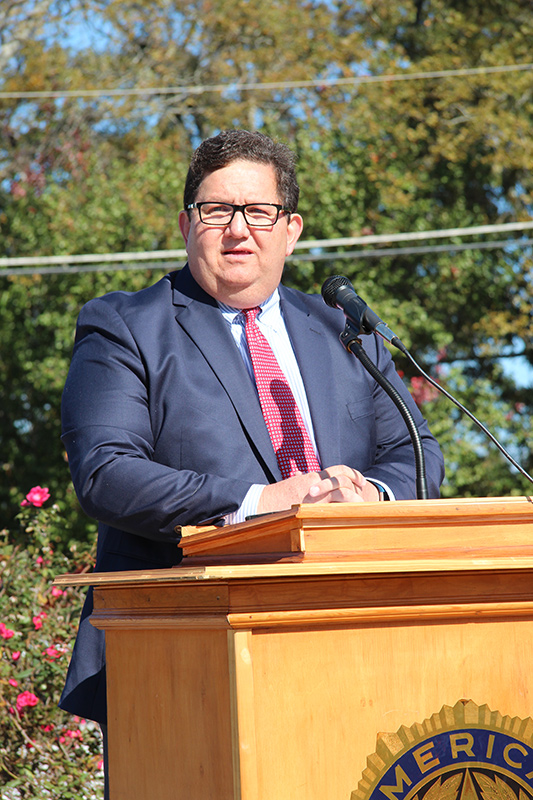 American Legion Post 111 and members of the Paulding County Veterans Memorial Committee held a Veterans Day Service downtown Dallas on Sunday, November 11th at 11:00 AM. The 25th annual service was held in honor of all Veterans, living and deceased, especially those who died while serving our country, with a special remembrance for the eighty-two Paulding County Veterans who perished in World War I, World War II, Korea, Vietnam and in the Middle East.
Taunia Stein, Finance Officer, American Legion Auxiliary Unit 111, passed out American Flags, Poppies made by Veterans and programs prior to the opening ceremonies. Scattered among the crowd were many local veterans, some in their service uniforms and most wearing a hat, article of clothing or pin representing their branch of service.
The memorial began with the always stunning presentation of colors by members of the Paulding County Sheriff’s and Fire Departments, followed by our National Anthem, beautifully sung by Ms. Tabitha Ketchum. The audience then recited the Pledge of Allegiance in unison. Next, an invocation was provided by Mr. William McPherson, Chaplain of American Legion Post 111.
After the invocation, Mr. Bill Fleisch, Commander of American Legion Post 111, welcomed the audience. Mr. John Black, past Commander of American Legion Post 111, then introduced the keynote speaker, the Mayor of Dallas, the Honorable Boyd L. Austin, Jr.
Mayor Austin told the crowd that he proudly comes from a long line of veterans, dating all the way back to the American Revolution. He gave a very thorough history of the evolution of Veterans Day throughout the years from 1918 all the way to the present time. Mayor Austin concluded by stressing the importance of remembering the actions of all veterans, both living and deceased. He stated that the acts of remembering and telling their stories to honor our veterans by keeping the memories of their sacrifices, made on our behalf, alive.
After Mayor Austin’s speech, an arrangement of red, white and blue flowers was placed at the base of the granite monument by officers of the Dallas Chapter of the Daughters of the American Revolution. The monument, which is scheduled to be moved to Veterans Memorial Park, is inscribed with the names of Paulding County residents killed during periods of war. Chaplain McPherson then presented the oldest member in attendance, from each branch of the armed services, with a ball cap.
The always impressive Twenty-One Gun Salute by members of the Paulding County Sheriff’s Department Honor Guard, under the direction of Lieutenant Randall Gravett, concluded the ceremony. 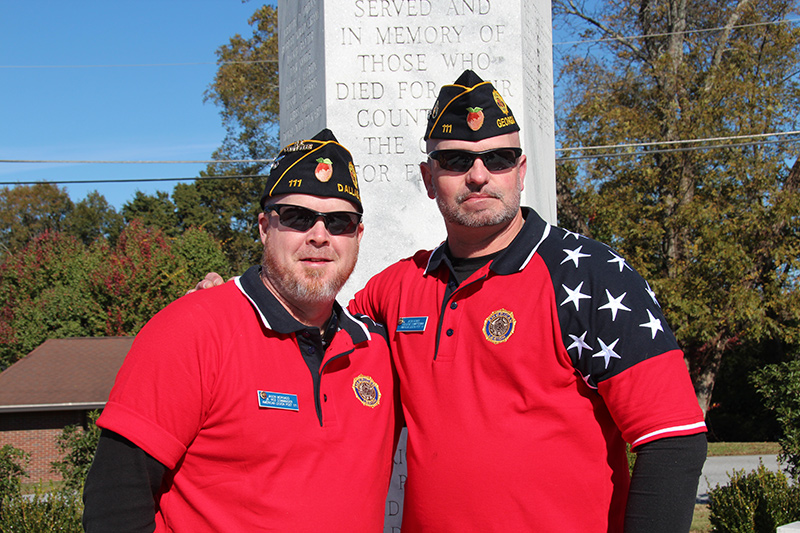