On Saturday, May 21st, all veterans and service members in the community along with their families are welcome to informally gather at 2:00 PM at the American Legion, Post 111, located at 2587 Scoggins Road in Dallas. There will be a DJ for entertainment. You do not have to be a member of the Post to attend.  Contact the American Legion at (770)445-2759 with any questions. Please remember to display your flag and to thank a veteran or a service member on Armed Forces Day! 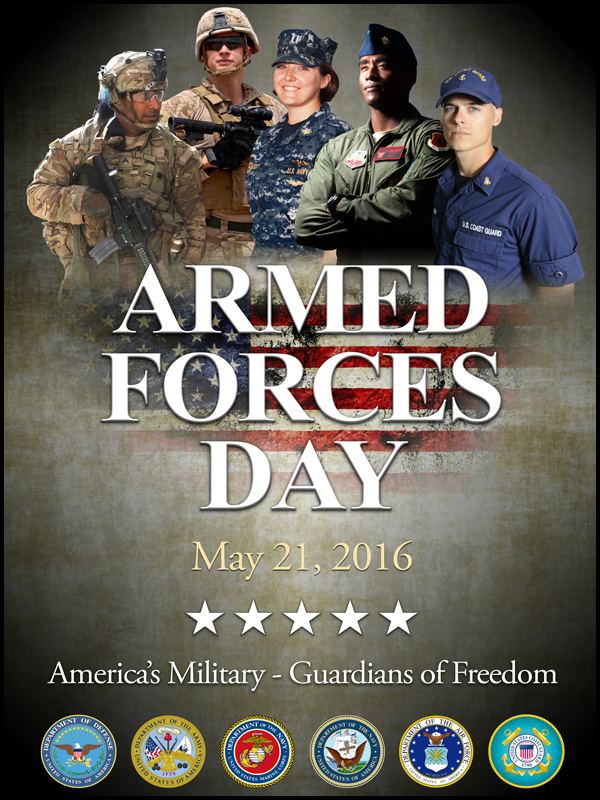 Armed Forces Day is the day designated for citizens to come together and thank our military members for their patriotic service in support of our country. It was originally announced on August 31, 1949 by Louis A. Johnson, the second Secretary of Defense.
Before the establishment of Armed Forces Day, the United States had separate days of celebration to recognize the Army, Navy and Air Force. The Marine Corps retained their special day, but also recognizes Armed Forces Day. On February 27, 1950, President Harry S. Truman, issued a proclamation that stated “it is fitting and proper that we devote one day each year to paying tribute to the Armed Forces as the servants and protectors of our Nation.” He further called upon citizens to “display the flag of the United States at their homes on Armed Forces Day” and to “participate in exercises expressive of our recognition of the skill, gallantry and uncompromising devotion to duty characteristic of the Armed Forces in the carrying out of their missions.”
Each year there is a different theme for Armed Forces Day. The theme for the first Armed Forces Day, celebrated on May 20, 1950, was “Teamed for Defense.” This year’s theme is “Guardians of Freedom.” Past themes have included “Appreciation of a Nation,” “Prepared to Meet the Challenge” and “Protectors of Freedom.”
Armed Forces Day is always celebrated on the third Saturday of May. It traditionally includes a display of state of the art equipment and military exercises on land, sea and air. Some localities have parades, while others host open houses or sponsor air shows.