The Unrivaled Team from Dallas Written by: Chloe Jones Over the past few months, Elemental Games, a tabletop gaming store in Dallas, Ga, has been a satallite store for a nationwide tournament called the Unrivaled Tournament Series. The series began in April and the satallites ended in June. The satallites gave players the chance to either win a trip straight to Las Vegas for the finals or let them visit regionals to try to win the trip.
The tournament series revolved around six games; Munchkin, Ascension, King of Tokyo, Villagers and Villains, Epic Spell Wars II:Rumble at Castle Tentakill and Nevermore. The finale grand prize winner of each one is going to receive a custom gaming table from the now out of business Geek Chic and $10,000 to first place, while 2nd, 3rd and 4th would receive smaller amounts and there is rumor of more prizes still to be had. Plus, the store they represent, Elemental Games, will receive a mirror prize of what their winners get. So if one gets $10,000, the store will as well and this means the store has a chance to receive up to $50,000 if all five win.
Elemental Games held tournament for all the games except one and found five people to send straight to Las Vegas, all expenses paid by Unrivaled. Unrivaled will fly them there and back and these five will be staying at the Paris Hotel and Casino and playing the finals at Bally's, which is connected to the Paris. Each person will get their own room as well. The trip to Las Vegas will be the first time most of them have been and the trip will be in the last weekend of October, as the Unrivaled team travels the rest of the east coast to finish regional tournaments.
The regionals of Georgia took place this place weekend, on the 19th, in Duluth and interviewed one of the players, Ami Dark, as well as requested that she play one of the games on camera. The game was live-streamed via Oomba.tv and also can be found on the Oomba youtube page. Mainly because she holds the record for participating in the most games. The finals will also be aired this way beginning October 28th.
The players who are going to Las Vegas will be Ami Dark(Epic Spell Wars II), Daniel Godinez(Ascension), Angel Davis(Nevermore), Brandon Brantley(King of Tokyo) and Christian Greene(Munchkin), each one a constant customer of Elemental Games and proud to represent the store. Ami Dark was quoted in saying that "while we're hoping to do our best and win so that we can win that money and the store can also become bigger and better, it's the first time many of us have been to Vegas, so we're just going to have fun and i'm going to TRY and enjoy my first plane ride."
Both owners of Elemental Games, Eddie Billman and Matt Sabol just want the group to have fun but the group expressed an underlying sense of responsibility to represent both the store and city. 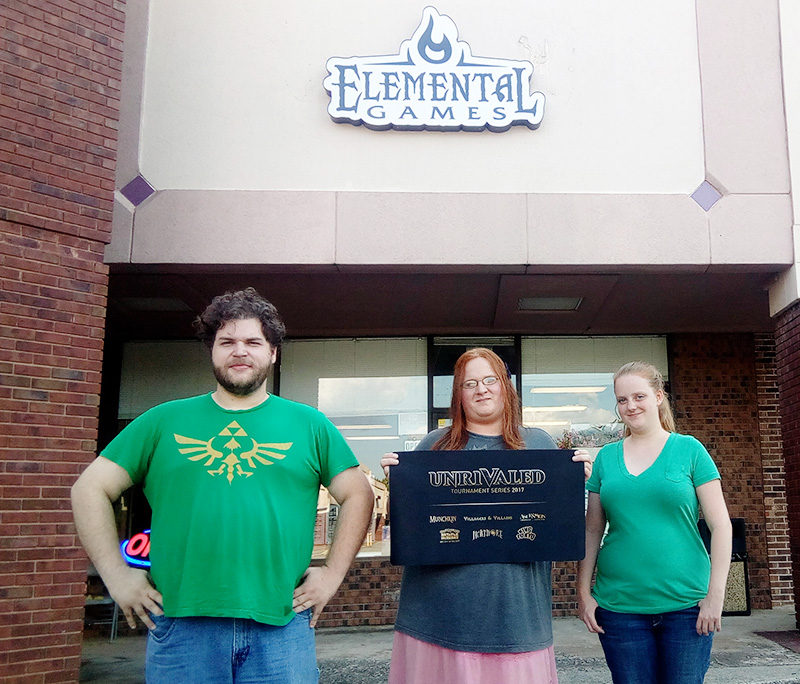