On Sunday, September 11, 2016, the Paulding County Sheriff's Office and the Paulding County Fire Department will hold a ceremony at Mt. Tabor Park (at the 9-11 memorial site) honoring the men and women who gave their lives to help others on one unforgettable day, 9/11/2001. On September 11, 2001, thousands of lives were lost throughout the United States as a terrorist attack was launched against Americans. There were nearly 3,000 people killed on this day. Hundreds of them were first responders, heroes, running without hesitation, to answer the cries for help. Hundreds of lives were likely saved due to these heroic acts. "We will never forget this horrible day," said

Paulding County Sheriff Gary Gulledge. "We will always remember the families of the heroes that died that day. We will never forget about the ones that lived through the horrifying experience and are left with terrifying memories." This event will honor the family, friends, and all Americans that were affected by the tragedy of 9/11.
This year’s guests include representatives from the New York Police Department and Fire Department (Retired New York Shields of Georgia). "We would like for the community to come out and support the families of the victims from 9/11," said Paulding County Fire Chief Joey Pelfrey. "This is a time when we as a Paulding County community can pull together and show our support for the people directly affected by this event, many of whom now live in our community."
This ceremony will be led and sponsored by the Paulding County Sheriff’s Office Honor Guard, the Paulding County Fire Department Honor Guard, and the Retired New York (RNY) Shields of Georgia. Everyone is invited to take part in this ceremony.

"These acts shattered steel, but they cannot dent the steel of American Resolve." President George Bush 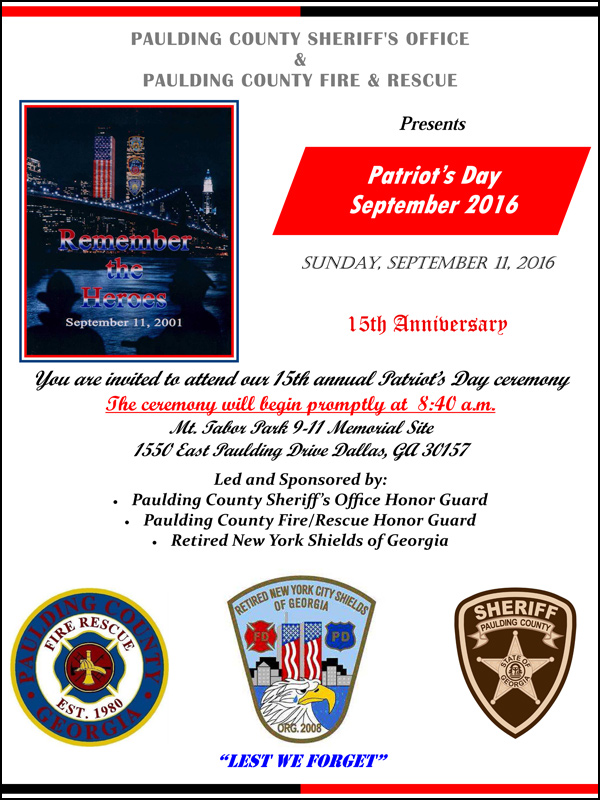