The Real Estate market is an integral part of our economy and nobody has their finger on the pulse of the latest market trends like Real Estate pundit John Adams. Adams was Keynote Speaker at the November Chamber Luncheon last week in Dallas.
Adams can be heard Sunday afternoon on NewsTalk920 WGKA with his weekly call-in show that has entertained and informed thousands of listeners for nearly three decades.
Adams said that Georgia’s economy has largely recovered and that the forecast, headed into 2018, for metro Atlanta, is mostly looking good.
Adams told Paulding business leaders last week that real estate statewide and locally is on the rise and expected to continue into the foreseeable future.
“Pace of gross domestic product and personal income growth are both going to accelerate in 2018, jobs will be plentiful, they’re going be well-balanced; we’re going to see gains both in goods-producing and service-producing industries, existing home prices, I believe will be at all-time new high, and we’ve finally recovered from what I call ‘the recent unpleasantness’ of the last seven or eight years, and I believe for the fifth straight year, Georgia’s economy is going grow faster than the nation’s,” Adams said.
“Our GDP has grown about 3.2 percent in this state during 2017, which is higher than the national average. Personal income should rise about 5 percent,” he said. 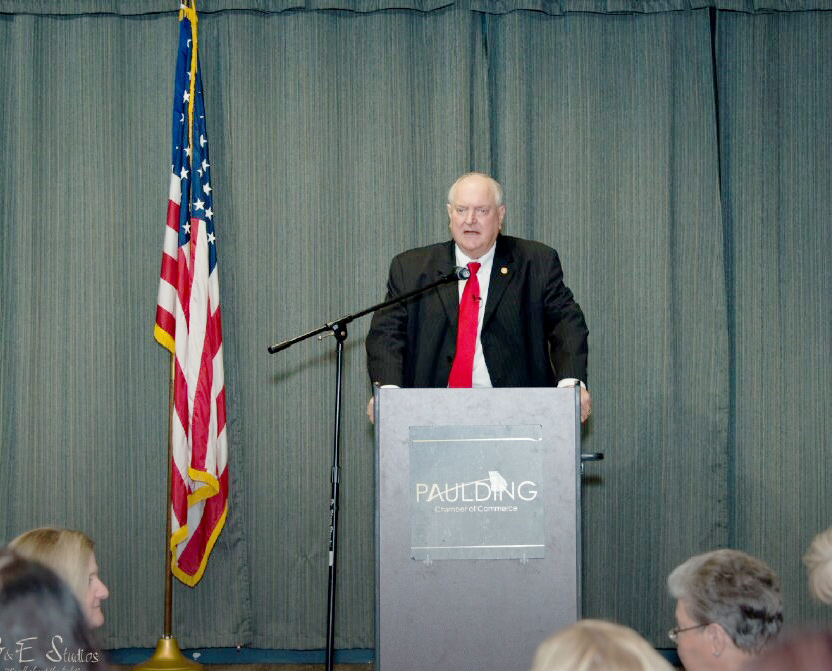 Gross Domestic Product (GDP) is the broadest quantitative measure of a nation's total economic activity. More specifically, GDP represents the monetary value of all goods and services produced within a nation's geographic borders over a specified period of time. Adams stressed that an over-riding important element to having and sustaining a good economy goes back to jobs and job creation.
Adams said employment will rise and unemployment will decline. 4.8 percent is the state’s unemployment rate, which is also below the national average.
Four primary indicators statewide to keep an eye on, he said, were, even more, projects in the economic development pipeline, second is more leverage from the housing recovery, third, state manufacturers will continue to do better than the nation’s average, and fourth, faster population growth than the rest of the country, he said. And Georgia ranks highly as a prospective site for a range of industries, Adams told Paulding business leaders. Many companies are moving their logistics and operations centers to Atlanta, he said. An example was Amazon, which is looking to locate and build a second headquarters, and the state they ultimately choose for the project could be looking at as many as 50,000 jobs, Adams said.
Adams finalized his talk last week by saying that while at first reluctant, he’s become a strong advocate for harnessing social media, even if it’s paying someone else to do it, because he realized how hugely beneficial to businesses it can be, Adams said.
Getting savvy with social media is the way to communicate effectively and take advantage of opportunities that would otherwise be lost, he stressed.
Adams’ Sunday Real Estate column has been a fixture in the Atlanta Journal-Constitution for decades and it is the product of years of helping home buyers and sellers, and listening to their concerns. He is also a regular contributor to CNN and Fox News including Fox 5 in Atlanta.