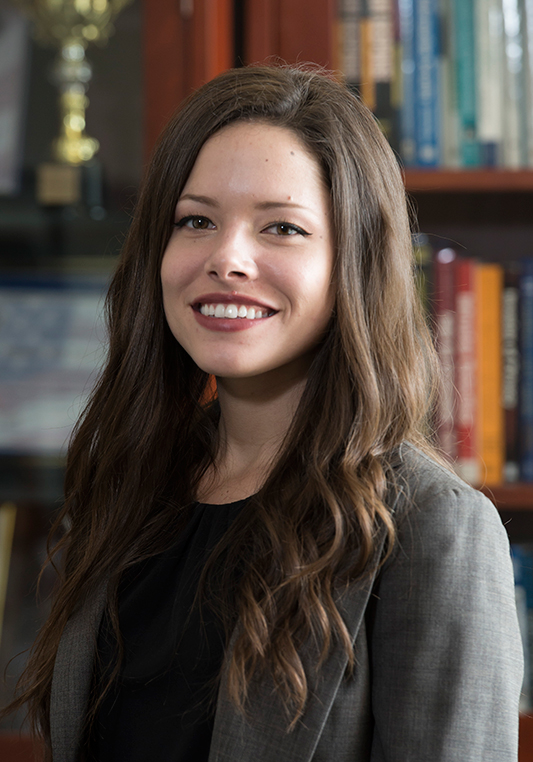 KENNESAW, Ga. (May 26, 2017) — It’s no surprise that Erica Moody had job offers lined up prior to graduating from Kennesaw State University this spring. A University Honors Program student and Coles College of Business Scholar, Moody graduated magna cum laude with a degree in economics.
Moody accepted what she considers an even better opportunity: being awarded a Fulbright Study/Research Award. She will depart this fall for a one-year master’s program in behavioral economics at the prestigious University of Nottingham in England.
“It was simply an opportunity I couldn’t pass up,” Moody said, “being awarded a scholarship to study at a university regarded as one of the world’s leading institutions for economics. I’m so excited.”
Moody, an East Paulding High School alumnus, became interested in behavioral economics on an education abroad trip she took last year to Guatemala. Behavioral economics examines how people’s behavior is influenced by psychological and contextual biases.
The experience in Guatemala was one of three education abroad trips Moody took as a KSU undergraduate. She also ventured to Kennesaw State’s campus in Montepulciano, Italy through the Great Books Honors program, and spent a semester in Madrid, Spain.
“Even in a group of high achievers, she stood out as a mentor, leader and role model to her peers – not just in intellect but in modesty as well,” said Kennesaw State economics professor Govind Hariharan. “In my 13 years at KSU, I have realized that the best students can outshine the best anywhere, and she certainly is among the best.”
The Fulbright Study/Research Award is the latest of several scholarships Moody received. She attended Kennesaw State on the Zell Miller Scholarship, earned a Donald Dalton Scholarship (awarded to an outstanding Coles College Scholars students) and received KSU Global Learning Scholarships that enabled her to take her education abroad trips. “So many people, whether they know it or not, have helped me in the process to get where I am today,” Moody said. “I am so grateful to every single person who has invested in me and believed in me.”
After she completes her master’s degree, Moody is interested in working as a behavioral economics consultant with a non-profit or philanthropic organization. She ultimately wants to become an economics professor – and combine two of her passions, teaching and traveling.
“The end goal is to be a professor who takes students on study-abroad trips,” she said with a laugh.