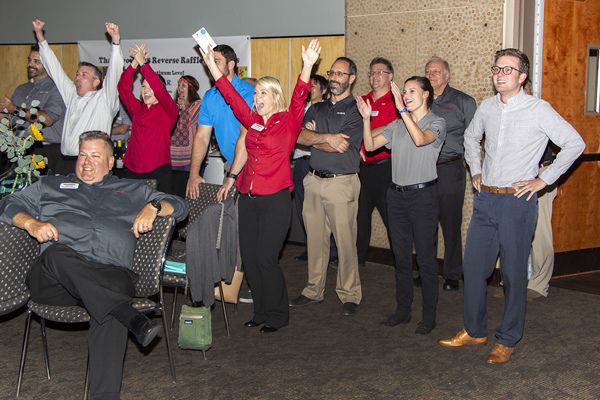 The audience cheered when the final ticket was drawn, and Tonsmeire announced that the winner was Yanmar. On behalf of the Chattahoochee Tech Foundation, the 2018 Reverse Raffle Chairman Susan Stephens, of Cartersville, thanked Yanmar for their enthusiastic generosity. More than a dozen Yanmar employees attended the 2018 Reverse Raffle along with Yanmar America President Tim Fernandez.
“What an awesome night that we were blessed to be part of,” said Yanmar America President Tim Fernandez. “It is still hard to believe that we had one ticket in the drawing when they got to the last five tickets. We all believed in what the Foundation is doing and wanted a chance to give more.”
“We erupted in cheers as they announced the big winner of the night was going to be the Chattahoochee Tech Foundation as Yanmar was the last remaining ticket,” said Fernandez. “It was a very proud night for me to see our team selflessly give back.”
The 2018 Reverse Raffle was held at the college’s North Metro Campus in Acworth and featured a 1970s theme with entertainment provided by Atlanta DJ Mark McCain, formerly of 96 Rock, and Emcee Louis Tonsmeire, of Cartersville. Sponsors of the 2018 Reverse Raffle represented a broad spectrum of local companies who contributed funds that will go toward helping students at Chattahoochee Tech. Platinum sponsors each contributed $3,500, with Gold Sponsors each giving $2,500 and Silver Sponsors each giving $1,500. The team of sponsors for the Chattahoochee Tech Foundation’s 2018 Reverse Raffle included: