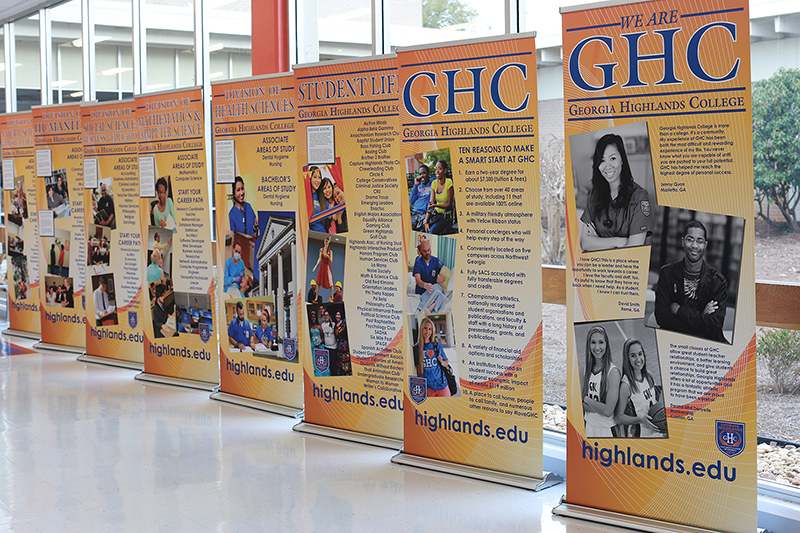 The 2015 CAA program had more than 900 entries from across the United States representing a diverse field of educational facilities from small community colleges to very large schools and universities.
All submissions were reviewed and scored by a national panel of industry experts, with a possibility of 100 total points. Participant’s entries competed against similar-sized organizations in their specific groups and categories.
Awards were issued for entries that received top marks from judges placing them in the top 16% of the nation for educational advertising excellence. Judging criteria included creativity, layout and design, functionality, message effectiveness, production quality and overall appeal.
Representing all areas of communications, media, marketing, advertising and promotions, the 2015 Collegiate Advertising Awards program contained some of the best advertising projects arguably in the world.
GHC took home the Silver Award (the top 12% in the nation) in the categories of Photo/Illustration Series and Invitations. GHC submitted its “We Are GHC” Diversity Campaign for the Photo/Illustration Series, which was an initiative of the GHC diversity committee and highlighted the personal experiences and stories of GHC's diverse faculty, staff and students.
For the Invitations category, GHC submitted its President’s Inauguration Invitation that was sent out ahead of GHC President Don Green’s inauguration in 2015. The Advancement team also earned the Bronze Award (top 16% in the nation) for its GHC Promotional Banners in the Poster/Display Series category. These retractable banners spotlight college academics, athletics, student life and more.
“I’m very proud of what all our Advancement team has accomplished,” said Mary Transue, Vice President of Advancement. “It truly is a creative collaboration. They work everyday to capture that hidden spark that makes GHC one of the best colleges in Georgia. And their hard work puts forth a great image and message to the communities we serve all across Northwest Georgia. I’m so happy to have such a great team leading the charge for Advancement at GHC.”