Great things are happening in the Paulding County High School Army JROTC Patriot Battalion. Each year, with the supervision of Army Instructors Lieutenant Colonel Greg McAfee, Sergeant Major Mark Hlasnicek, and Master Sergeant John Underwood, the Patriot Battalion executes a Service Learning Project. The objective of each project is to unite the Patriot Battalion to learn and work together as a team, all while giving back and connecting with the community. Each year, the project has grown larger and larger. During the previous year, Cadets developed and designed reserved parking signs for wounded and retired veterans, that were placed at local municipal buildings and businesses all around Paulding County. 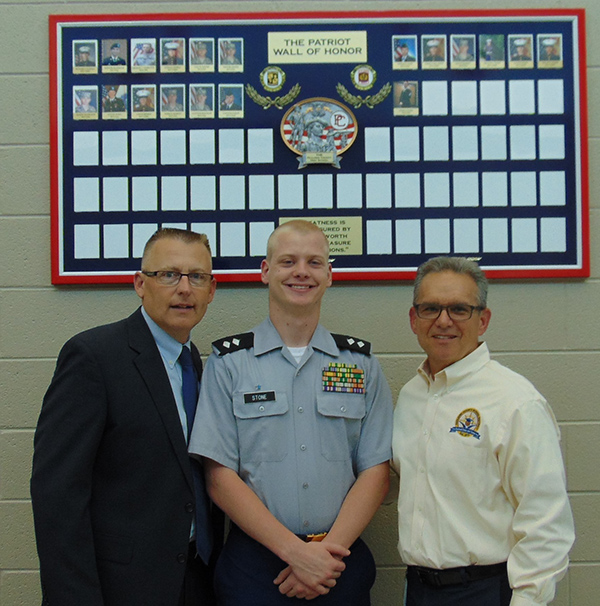 This year the Patriot Battalion Cadets came up with the concept for a Military Wall of Honor board, dedicated to brave students who have graduated from the high school and gone on to serve in the U.S Armed Forces. With the help of a unit fundraiser and Paulding Trophy, the idea became a reality. After months of design and development collaboration, along with an informational and outreach campaign to the community, the board was dedicated on May 2nd, 2016 and featured nineteen names and photographs of former graduates. In attendance at the dedication were Paulding County School District leadership and school board members, as well as family and friends of those being honored. The board is an enduring project that will continue to grow as future graduates go on to serve in our great nation’s military. “I am very proud of this year's project,” says the Patriot Battalion Commander, Dylan Stone. “This project helps show our appreciation to those who have chosen to join the U.S Military, and gets the community more involved here at Paulding County High School.” The board itself is located in the front atrium of the school and the JROTC program highly encourages the community, especially friends and families of those honored, to come admire its beauty. The JROTC program is open to any donations to help with the future upkeep of the board and appreciates any support given.

Graduates Honored at the dedication were: