Paulding County High School Patriots and Head Coach Van Spence was presented the revolving “Battle” trophy on November 3rd with a true rivalry battle until the final seconds of the game. East Paulding was driving to score and the clock ran out with them being on the 10-yard line. Paulding County High School Patriots won 19-14 sending the Patriots to the State Playoffs for the first time in 13 years. Both teams gave 110% in this “Battle” and it was a nail-biter until the final seconds of the 4th quarter. This is the 1 st year for the “Battle” game with the Raiders out of a two- year stint. Congratulations Patriots and Good Luck in the Playoffs!
The Phillips family would like to thank PCHS Principal Craig Wilcox for his hospitality and accommodations for the game on Friday night from beginning to end. A big thank you to EPHS Principal Jason Freeman for giving a heartfelt presentation about Coach Ken Phillips and the memories he instilled in all his players. Thank you seems so small for how much each of these people mean to our family. We love you. 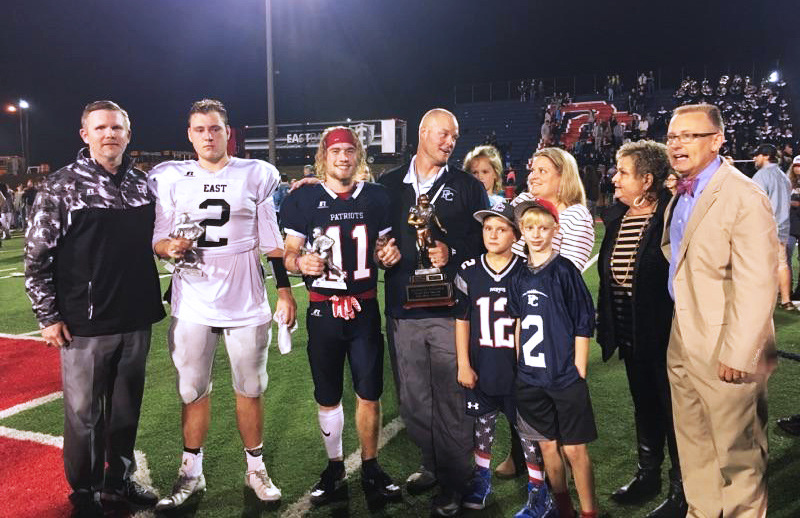 A brief history of how the “Battle” came about in Paulding County.
The “Battle of Dallas” was established in 1999 between East Paulding High School and Paulding County High School to honor Coach Ken Phillips. Coach Phillips passed from this life on August 7, 2005 (his grandson, Kent, was born 3 years later on August 7, 2008). When the “Battle of Dallas” tradition began, the District had only two high schools. The Battle of Dallas was played from 1999 – 2007 with Paulding County High School versus East Paulding High School. Since the District has grown to five high schools, the name changed to the “Battle of Paulding”. In 2008, The “Battle of Paulding” was established to carry on the legacy of Coach “Big Daddy” Ken Phillips and his beliefs about the game of life. At the end of the “Battle” both teams gather at the 50-yard line for a presentation from Coach Phillips wife Annelle, and daughter Kenelle. Coach Phillips grandchildren, Kent and Kenzie Jay Gresham present the MVP trophies and the revolving “Battle” trophy to the head coach and principal. “Big Daddy,” as his players lovingly referred to him, was the head coach for a record 90 games at PCHS and led the program to its first winning season in 1980. His tenure at Paulding was nine seasons (1977-80; 1985-89), a mark no one in the history of the program at PCHS has surpassed. In August of 2005, the field house at Paulding County High School was named in honor of Coach Phillips. He taught life lessons and touched thousands of lives in a way that made everyone around him a better person. At the end of every football game, win or lose, he always told his boys to go home and tell your mom and dad you love them. Paulding County teams continue to honor “Big Daddy’s” memory by carrying on life-long traditions he established a decade ago. Coach Phillips has left a legacy in Paulding County that will live on in his players for years to come.