Saturday, August 18th, 2018 kicked off the 2018 Cross Country season for East Paulding, as they opened up at the Hoya 2 Mile Invitational. The Raiders ran with a depleted squad as the varsity runners had the weekend off in preparation for the upcoming weeks. Almost equaling the number of runners last year at this race, East Paulding was out to show their depth and size of their team for this season.
The top finishers on the Varsity Girls side were Brylie Galeazzo (14:46) and first-year Cross Country runner Ayo Sogbesan (14:47). Both girl seniors did a good job of moving up throughout the race. Senior Austin White (12:07) and freshmen Markus Ruiz (12:17) led the boy's side. Austin led the Raiders into a better top 10 team average than last year, without the Varsity team. Coach Taylor Ford said, “We are excited to see our team starting to develop some depth this year. Having depth lets our team rest runners when needed while still being competitive. We knew our top JV team would be strong, but today impressed us with 6 of the top 7 boys being first-year runners in the program.”
On the JV side, the boys placed 5th, led by 8th grader Eli Corn (11:47) 3 rd overall and freshmen Sebastian Tidor (12:42). The top JV girls were freshmen Swaye Mohler (15:57) and 8th grader Kendall Pitts (16:25). The JV and Open races were full of the new runners that are eager to compete and improve throughout the season.
Next week the Raiders will be in Hampton, GA at Battle of Atlanta, where they will run their Varsity for the first time this season. Here, Kaleb Scott (top returner from last year’s County meet), and Chloe Chin (2018 Track & Field 3200 County Champion) will open up their seasons with the rest of their Varsity team in hopes of a strong 2018 season. 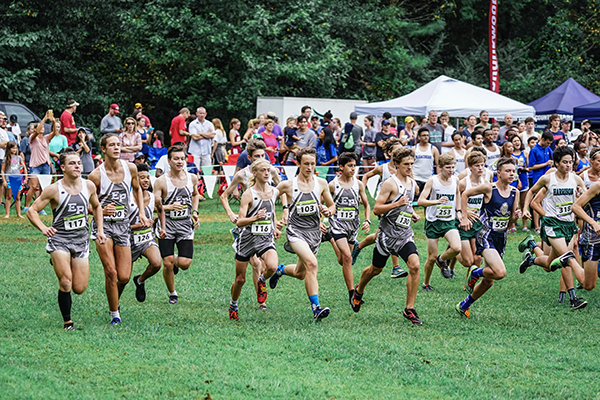