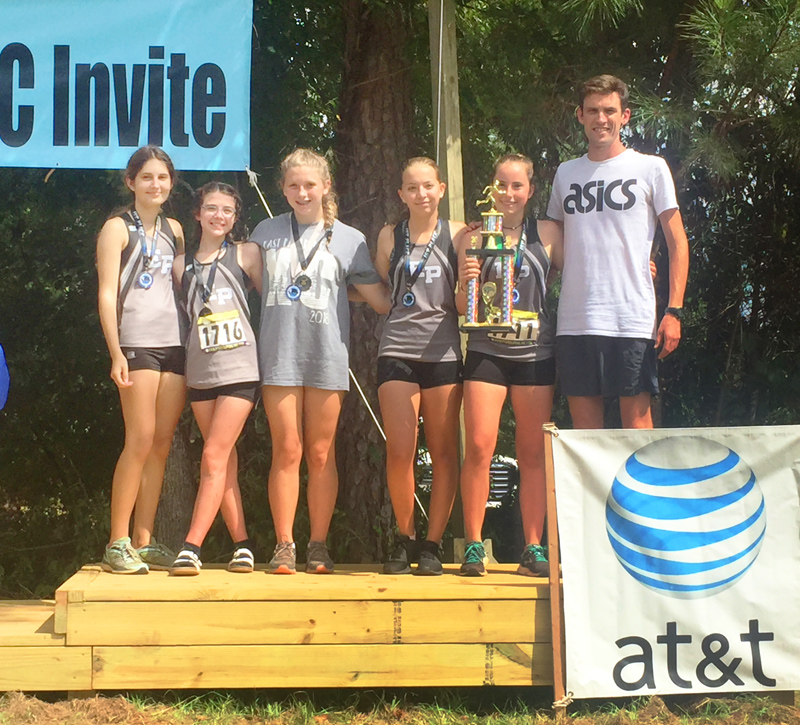 The first official rankings came out on 9/4 for the 2018 Cross Country season. The Lady Raiders are ranked 6th in 5A and the boys are on the watch list. This is the highest ranking for girls in the past few years, and for the boys, this is a decent ranking because they have not ran a full squad this season. Saturday of the Labor Day weekend, the Raiders raced at Heritage Christian Church for the Starrs Mill Invite. The meet hosted over 20 teams, including multiple that are currently ranked in the top 10 of their class.
The Varsity Girls kicked things off at 8am. The top 3 girls for East took things out very quickly and looked comfortable running together. Kat Sweeney pressed hard in the second half of the race to be the top finishers for the Lady Raiders in 35th place (21:45). Chloe held on to a second place finish for the team (22:18) over 40 seconds faster than the previous week. Brylie Galeazzo returned to the fold this week looking poised to fight for a top spot running 22:39 in her first 5k of the season. Katelyn Lazere (69th) and Lauren Gramling (99th ) rounded out the top 5 for the Raiders in route to a 9th place finish and ahead of Whitewater and Jones County High Schools, who beat the Raiders the week before.
The Varsity Boys ran a short-handed team without top runner Kaleb Scott and also with sophomore Owen Senecal forced to not finish the race due to injury. Keith Mathes was the top finisher for the Raiders (59th) in 18:08, which was a 33 second season best from a week ago. Twin brother David Mathes placed 106th and Alfonso Garcia placed 108th to round out the normal top 5. Jared Swiney and Jacob Smith, both juniors, stepped up and filled in the 4th and 5th spot in the race for the Raiders, finishing 157th and 160th overall. The Raiders finished in 18th place overall out of 29 teams. Coach Ford said, “ we are excited to see others step up when needed, especially top runners learning to run on their own when they might be used to having a pack to work with.”
JV Girls had only 4 finishers, with the top runner being Grace Plummer in 28:14 for a new season best. JV Boys placed 14th out of 22 teams with junior Logan Steele running the fastest time of 20:44 in his first cross country season. The last race of the day for the Raiders was the Freshmen race, that included 8th graders. On the girls side, 8th grader Kendall Pitts finished 5th overall in a time of 25:58. This along with a 10th place finish from teammate Deena Papadakis led the Freshmen Lady Raiders to a win. The Freshmen boys looked strong last week and they didn’t disappoint in their second week in a row with a win. 8th grader Eli Corn finished 3 rd overall (18:52), 9th grader Markus Ruiz (19:28), 9th grader Luis Morales (20:17), and 9th grader Sebastian Tidor (20:31) all placed in the top 10 overall. Greyson Hilber rounded out the top 5 Raiders in 19th place.
The Varsity Raiders will race at Carrollton this weekend.