This past Saturday at 5th third bank stadium at Kennesaw St. University, two Paulding natives helped the Owls with their fourth straight win over a tough Samford team. #3 Chandler Burks from South Paulding leading the offense and #25 Jace White a defensive standout from North Paulding. The Samford Bulldogs struck first with a field goal to take the lead 3-0. QB Chandler Burks took command of the offense and drove the ball downfield and with a Burks 1-yard dive over the middle to get the Owls on top. The defense held strong through the first half keeping the Bulldogs out of scoring position. Jace White a DB for the owls had a few blocked passes and a solo tackle to help the Owls defense. The Owls offense struck again with a 9yrd TD pass from Burks to TJ Reed to widen the Owls lead to 14-3.
The Owls took over the second half where they left off from the first and drove the ball downfield and capped it off with a 3-yard run from Burks to take control of the game with a 21-3 lead. Followed up by a field goal in the fourth quarter extending the lead to 24-3. The Samford Bulldogs tried to make a comeback late in the 4th quarter, but the Owls defense held them back to just one TD for the day with 1:33 left in the game to close the gap to 24-10. The KSU Owls will host Presbyterian at 5th 3rd bank stadium this Saturday at 2pm. 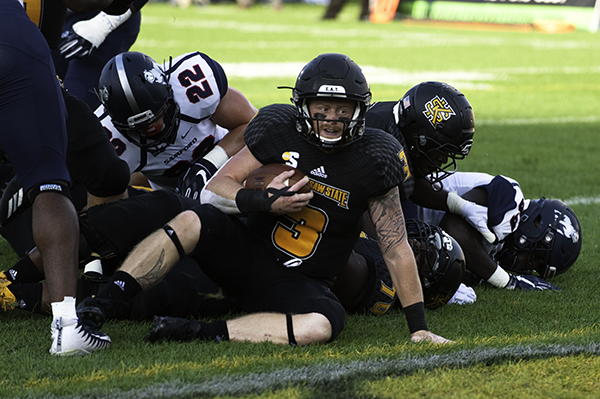 #3 Chandler Burks crosses the goal line for an Owls TD. 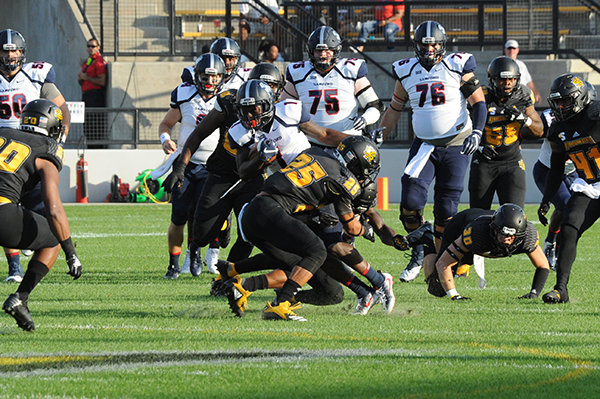 #25 Jace White Takes down the bulldog to stop their drive.