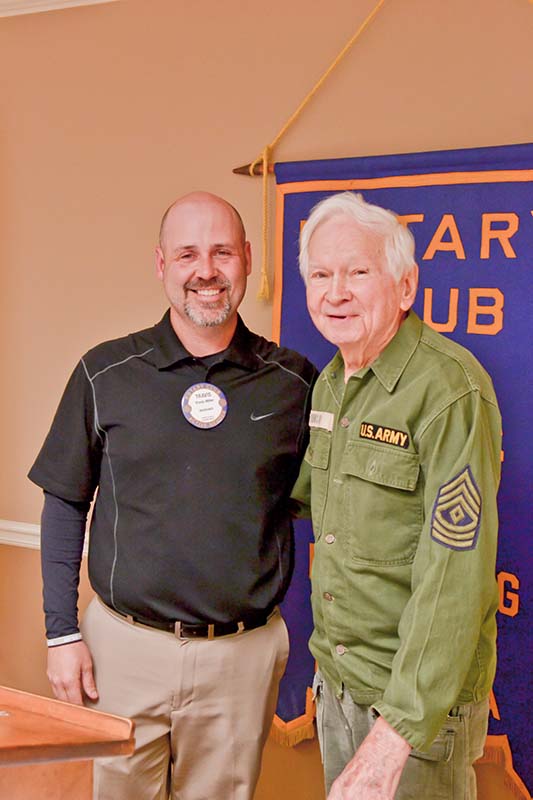 Mr. Earl Duncan, a founding member of the Paulding Rotary Club in 1969, spoke about his time as an enlisted man, and the impact that it made on his life. Mr. Duncan responded to the draft and left for boot camp as a young man having just completed his certification to become a pharmacist. After basic training, the majority of the young men were shipped to the frontline in the Korean war. During a brutal winter reaching temperatures of -38° below zero most froze to death. The Korean War ultimately claimed 37,000 American lives during the three years of fighting.
Mr. Duncan explained how he was shipped to Fort Belvoir Virginia instead of going to the front lines. On the military base, he served in the medical wing and began working part-time at a local pharmacy. However, Mr. Duncan received orders and shipped out, first to California and then on to Korea. Upon his arrival in October 1951, he joined the 9th Infantry Regiment Medical Company. Mr. Duncan soon made his way to the front lines. Stationed in the mountains of Korea, which are extremely vertical, Mr. Duncan had an extremely close call. While walking back to his tent a North Korean sniper narrowly missed a fatal shot. The bullet pierced several outer garments of clothing but left Mr. Duncan unscathed. 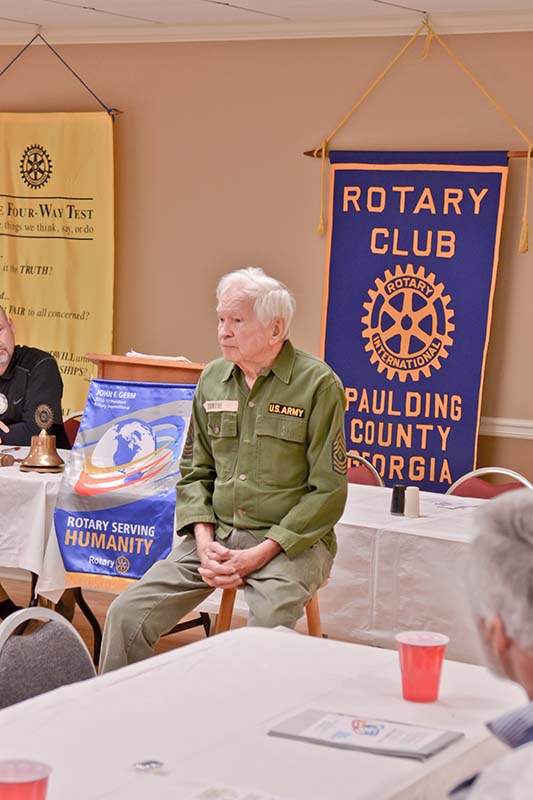 Eventually reassigned to a staging hospital and then ultimately returning home Mr. Duncan had risen in rank from private to Master Sgt. in only 10 months. After returning home to Marietta Mr. Duncan resumed his life and career as a pharmacist. Earl Duncan continued to volunteer for the Army reserves and was promoted to first Sgt. and awarded for his service by the governor of Georgia. Today Earl Duncan lives in Dallas Georgia and is an active member of the Paulding County Rotary club. Mr. Duncan attributes his safe return home to the blessings of his Lord and Savior Jesus Christ. Mr. Duncan is grateful for the experience he had, for those who made him a man he is today. Imparting he offered a word of wisdom for all. The three most important things for success are attitude, attitude, and attitude. Mr. Duncan elaborated that by having a positive attitude he was able to succeed and achieve experiences and good fortune that would benefit him his whole life.
The Korean War began in 1950 when the communist North North Korea invaded South Korea. American forces along with the United Nations entered the war in defense of South Korea. China (with aid from Russia) entered the war in support of North Korea. An armistice was signed in 1953 which ended the fighting. No peace treaty has ever been signed, and technically still at war, a demilitarized zone separates the two countries. To this day disputes and conflicts continue. Many have neglected to recognize our involvement with Korea as a war, citing it as a police action. In its three-year span, the fighting was intense and was a first for many forms of modern warfare. Claiming 37,000 young American troops and with an estimated 1.2 million death toll (total casualties both sides) it was a very bloody war indeed.