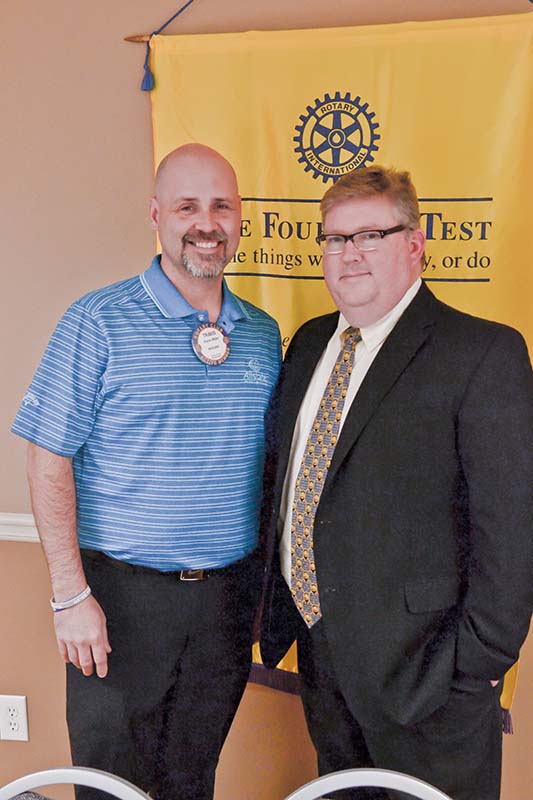 Club Pres. Travis Miller opened the meeting with announcements and updates, then turned the meeting over to Chad Plumley to introduce our guest speaker. Rotary member Chad Plumley introduced our guest, Paulding Superior Court Judge T. David Lyles to warm welcome by fellow Rotarians.
Judge Lyles began by thanking the club for the invitation and opportunity to share with members of local community. With that Judge Lyles introduced himself and recounted his path to serving here in Paulding County. As a graduate of Emory law school in 1998, he had served as an intern for the Fulton County District Attorney's Office and upon passing the bar was employed there as an assistant district attorney. After two years, Mr. Lyles was promoted to the senior assistant district attorney and became the lead prosecutor in that courtroom. Mr. Lyles continued as a prosecutor in Fulton County until 2004, when he accepted a position in Forsyth County. Then, in 2006, Mr. Lyles relocated to Paulding County as the Senior Assistant District Attorney. After a decade of service, he was elected Paulding Circuit Superior Court Judge in May 2016, filling the vacancy of retiring Judge Kenneth Vinson.
Judge Lyles explained that he is only handling civil cases for the first year. Being a former prosecutor, this allows time for court cases to clear proceedings that he may have had access to as prosecutor. Judge Lyles explained many things with regards to our judicial system here in Paulding County, and in the state of Georgia. Recent progress made in the area of sentencing reform has allowed judges greater flexibility in sentencing. The imposition of lengthy prison sentences for all offenders has had little effect in reducing the amount of crime while creating a tremendous burden and expense to the prison system and to the taxpayer, respectively. Prioritizing prison space for violent offenders and repeat offenders while employing alternative means to deal with nonviolent offenders has stemmed the rising tide of prisoners in Georgia.
Paulding County now has a court specifically for drug offenses. According to the Department of Corrections, over the past five years counties implementing a drug court have seen as much as a 23% reduction in the rate of prison commitments. Judge Lyles also hopes to see a mental health court soon in Paulding County, as this will further increase sentencing options and provide much-needed assistance to an under-served portion of our population.
Judge Lyles, upon answering questions from the Rotary members, thanked everyone for their support and participation in the county and for the opportunity to speak to the Rotary club.