The Sixth Annual Pigskin Preview For 2017 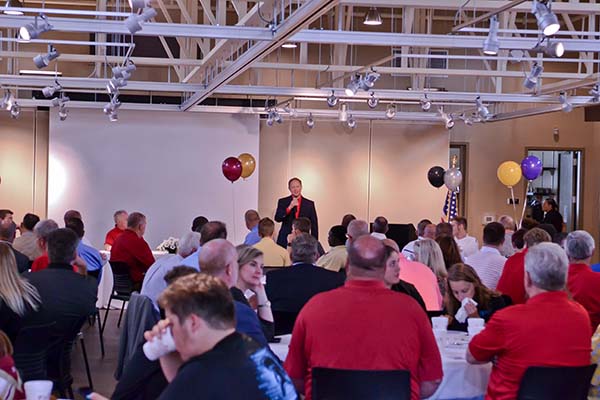 Every year the Paulding County Rotary club organizes this event to kick off high school football season by inviting the head coaches of the five high schools in Paulding County to speak on the promise of their upcoming year.
6th Annual Pigskin Preview took place at the Dallas Civic Center in Historic Downtown Dallas Georgia. In attendance were many members of the local community and county government. Organized by the Paulding County Rotary Club, former Club president Ford Thigpen greeted everyone and thanked them for their continued support and participation in this event. Among the community leaders was Paulding County Board of Commissioners Chairman David Carmichael, Judge Dean Bucci, Judge T. David Lyles and Sergeant Ashley Henson from the Paulding County Sheriff Department. A record number of educators also were present from the Board of Education to each of the five high schools in Paulding County. Current Rotary Club president John Grant took to the podium to welcome and thank guests for their continued support. Mr. Grant expressed what a privilege and honor it was for the Rotary Club to participate with our schools in this annual event. With that, Dallas First Baptist Pastor, Todd Gaddis said a prayer before the remarks of the guest speakers.
Mr. Thigpen welcomed Jason Freeman to the podium as co-founder of the event and honoree. Mr. Freeman thanked and acknowledged all the guests in the attendance. Mr. Freeman was especially proud and grateful for the five head coaches now currently coaching high school football here in Paulding County. Mr. Freeman cited statistics that underscore the importance of taking advantage of this opportunity to teach leadership skills and provide guidance for young men here in our local community. With that, Mr. Freeman yielded the podium to Ford Thigpen as he introduced the first of the five head coaches to speak.
Ed Koester of South Paulding took the podium and thanked everyone for the opportunity to be here and speak on behalf of South Paulding. Koester thanked the academic and coaching staff of South Paulding for being so supportive of his role as head coach and highlighted the importance that high school football has played in his life. Being able to work with and mentoring these young students have made a tremendous impact on him throughout the course of his career. Coach Koester introduced several members of this year's football team with great excitement. 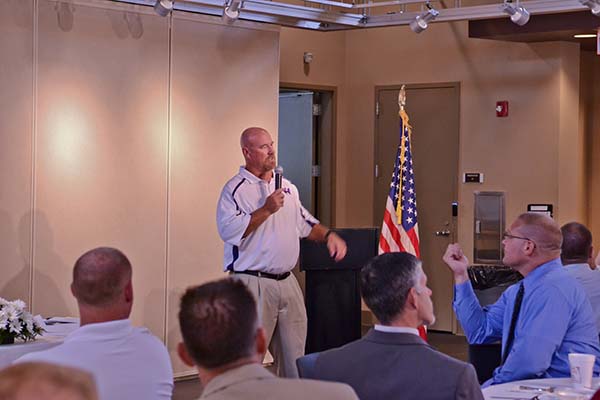 Next, Mr. Thigpen introduced Chris Brown head coach of Hiram High School's football team. Coach Brown thanked everyone for the opportunity to be here and felt privileged to be grouped with so many other great coaches involved in this county's football teams. Coach Brown invited everyone to come and watch a practice session at Hiram. In addition to watching the football team's practice, you'll see close to a third of the students participating in the school's extracurricular activities. Band, Cheerleading, and ROTC, all voluntary activities that our kids elect to stay and be a part of. Seeing so many young people choose to spend their time at school is and has been extremely encouraging. Coach Brown went on to thank the staff and especially the principal for all the support. Coach Brown introduced his players with pride
Van Spence of Paulding County high school was next to the podium. Coach Spence, beginning his second year at Paulding County high school told everyone how grateful he was to be part of the Paulding County community. He went on to state how many great people he's met here and how exciting a time it is for him and his family to be a part of the changes that are ongoing at Paulding County high school. Paulding County high school Principal Wilcox and the entire staff has been supportive and dedicated to reshaping the commitment students. Coach Spence went on to thank everyone as well as the other coaches for their encouragement and support in welcoming him and his family and the community and the school system. Coach Spence was excited to talk about his students and athletes including their “Burn The Boats” strategy for success on the field as well as encouraging students to commit to their best effort scholastically. 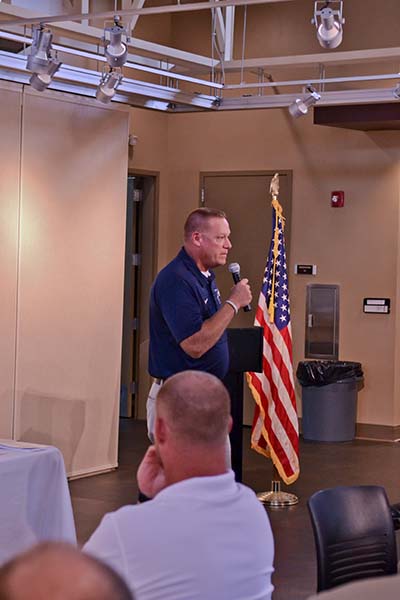 Next to be introduced by Mr. Thigpen was East Paulding's football head coach, Billy Shackelford. Newest of the five head coaches Mr. Shackelford thanked Mr. Freeman and everyone for the support and encouragement that had been given to him. He went on to state how supportive the staff had been prior to introducing some of his star players on the season's team. Coach Shackelford also went on to express and echo the sentiments of the other coaches as they cited the character building aspects of football. The leadership skills in the culture surrounding success are his primary focus going forward as the coach. He also thanked the Rotary Club and cited their "Service Above Self" motto as the ultimate goal of teaching young men leadership skills and how to be servant leaders in their communities.
Head Coach Scott Jones of North Paulding High School was introduced to be the final speaker and round out all of the high schools head coaches at the presentation. Coach Jones appreciated the sixth year of the pigskin preview. Coach Jones went on to state how proud he was to be a part of the community and witness to the positive transformation that's gone on in Paulding County. During his 32 year career, he said this is the best place that he'd ever been and can think of no other place that he would rather be. Coach Jones thanked Principal Mark Crowe and the staff for all their support. He introduced his star players for the next season and spoke highly of their promise not only in football but in their future beyond.
In closing Ford Thigpen took the podium and thanked everyone for their participation and continued efforts to instill values in the next generation. In closing, everyone rose to the Pledge of Allegiance as this year's pigskin preview came to a close. 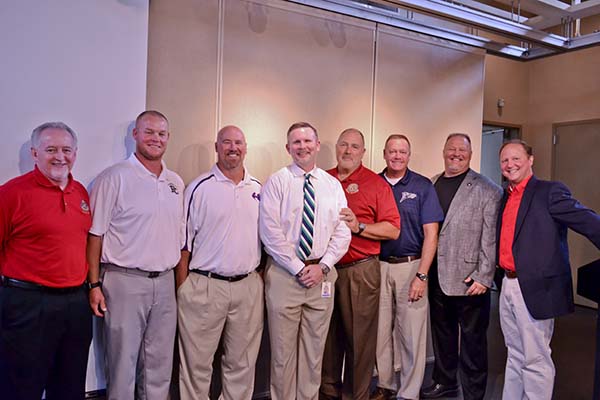 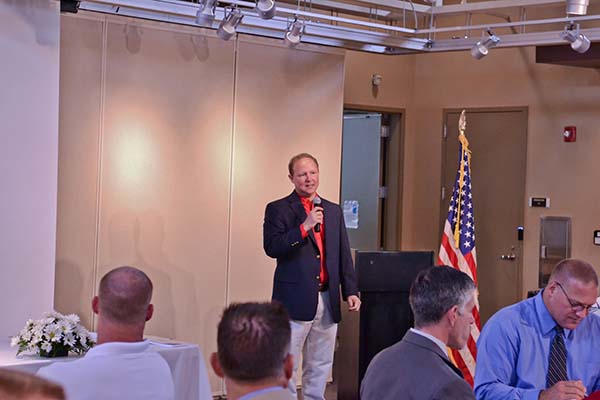 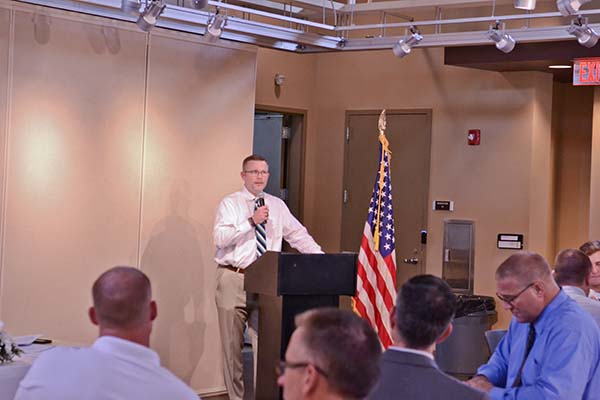 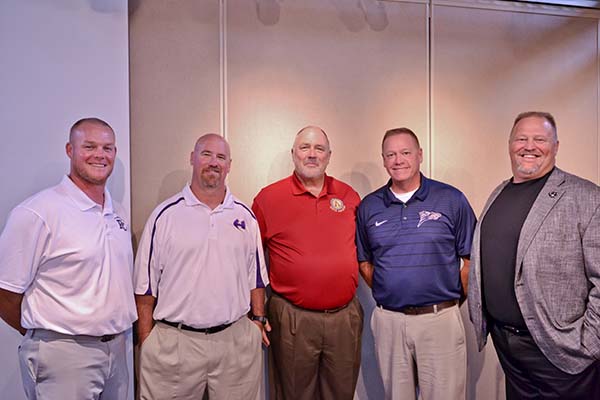