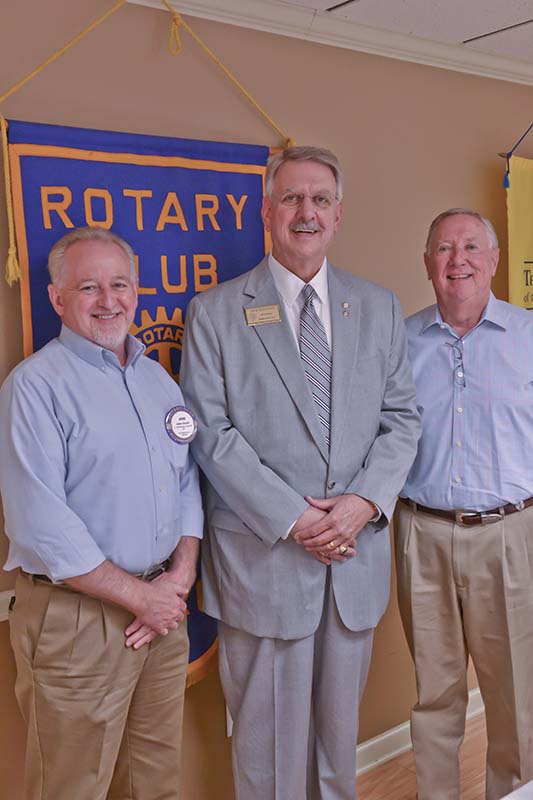 Paulding County Rotary Club president, John Grant brought the meeting to order, thanking all our guests for their attendance. After updating the members on the schedule of events, Mr. Grant turned the podium over to Ken Thigpen. Mr. Thigpen thanked District Attorney Donovan for his attendance and having served Paulding County for past 6 1/2 years since winning the 2010 election. Mr. Donovan assumed the role of Paulding County District Attorney in 2011. Mr. Thigpen also encouraged everyone to attend the public board meetings here in Paulding County so that everyone might know firsthand how we are being represented. With that, Mr. Thigpen turned the podium over to Mr. Donovan.
Mr. Donovan took the podium and thanked everyone for being invited. Especially, in a non-election year. Mr. Donovan was more than happy to share with the Rotary Club what was going on at the Paulding County District Attorney's Office. With an approximate $2 million per year budget, it's good to know where your money is going. Over the past six years, the population has grown from 26,000 to 155,000 people living here in Paulding County. The new Sheriff's Office and County Jail will have 660 beds. Like the Sheriff's Department, the District Attorney's Office also has a similar need for growth to accommodate the needs of the growing County.
District Attorney Donovan explained how his office remained mindful of the role of discretion in the pursuit of justice. His office remains resolute in pursuing the dual aim of our criminal justice system. And that is that by no legal means shall the guilty be allowed to escape nor should the innocent to be made to suffer. DA Donovan gave several examples of recent events that called in the cumulative knowledge of his staff to evaluate the crime and the merits of the cases before them to dispense suitable legal action. In some cases, this called for the First Offenders Act to be utilized or Pre-trial Diversion Program.
Mr. Donovan cited some statistics for Paulding County. His office handles about 200 cases per month. Approximately 50 are dismissed or otherwise resolved with the remaining 150 being split between 50 felonies and approximately 100 misdemeanors. Mr. Donovan assured everyone that when his office offers a plea agreement to the defendant the first offer is always the best offer. Mr. Donovan thanked everyone again and took some questions from the Rotarians. He answered some questions relating to the opioid epidemic spreading through the nation and our county. Also, Mr. Donovan informed everyone about the seriousness of gang-related activity in Paulding County. He assured everyone that there was an active threat from gangs to infiltrate the county and that they were using the school systems to proliferate their menace. Thanks to the diligence of the Sheriff Department that uncovered leads pointing to an outside influence emanating from the Chicago area as the source of this criminal elements influence.
Dick Donovan was elected District Attorney for the Paulding Judicial Circuit in 2010, and took office January 1, 2011. Mr. Donovan has lived and practiced law in Paulding County since 1981, when he first opened his law office in Hiram. Mr. Donovan and his wife, Teresa (née Walton), a retired East Point police major, live just south of Hiram in the home they built in 1980 on family land. Mr. Donovan has served on the State Bar of Georgia’s Committee on Professionalism and has also served on the Legislative Committee of the District Attorneys Association of Georgia as well as the Training Committee of the Prosecuting Attorneys Council. The Paulding Judicial Circuit District Attorney is the chief law enforcement officer of the circuit.
Referenced:
http://www.pauldingda.com/meettheda.html