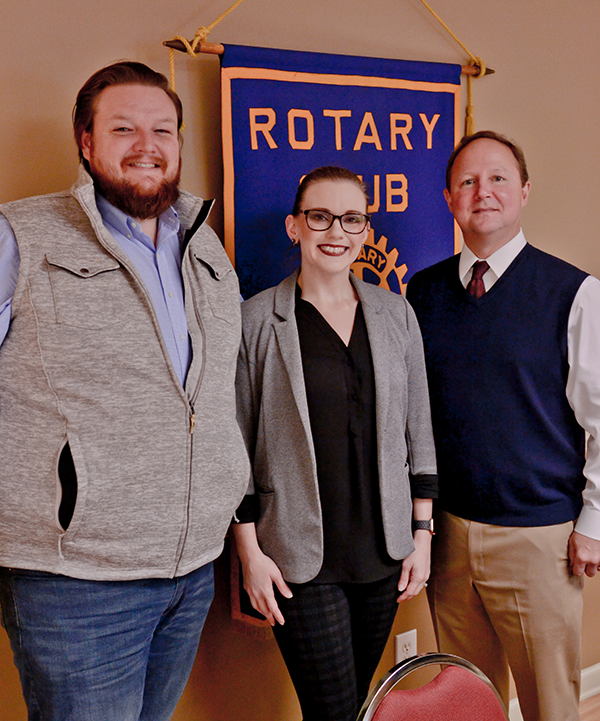 Paulding Rotary Club President Ford Thigpen welcomed Ashleigh Headrick from the Georgia Office of the Attorney General. Mrs. Headrick works in the Criminal Justice Division, Post-conviction Section. Introduced by club member and husband Brian Headrick, Mrs. Headrick began her presentation.
Mrs. Headrick began with a complete and thorough overview of the Georgia Attorney General's Office (aka the Georgia Department of law). Comprised of nine divisions (5 legal divisions and 4 specialty units), Mrs. Headrick clearly defined each one, stating its purpose. As an entity, the office functions as any major law firm would employing approximately 200 lawyers. These lawyers provide legal representation to the agencies, officers, and employees of state government. They execute the constitutional and statutory responsibilities of the Attorney General. Currently, Chris Carr holds the office of Attorney General for the state of Georgia.
Mrs. Headrick is an attorney for the Criminal Justice Division, specifically Post-Conviction Litigation. Where it is her job to defend the convictions of those people who have been convicted of crimes and sent to prison. Mrs. Headrick and 13 of her colleagues in this section represent the state in non-death penalty murder appeals to the Georgia Supreme Court. The state Supreme Court has exclusive jurisdiction over appeals from crimes for which the death penalty can be imposed. The Capital Litigation section handles the death penalty work. The majority of the work that Mrs. Headrick and her colleagues do is written. On occasion, either her office or the appellate will ask for the case to go to oral argument, where an attorney from either her office or the District Attorney's Office will argue against the appellant (the criminal defendant) attorney before all nine justices. This is a process that happens at a very late stage after the criminal's original conviction. This is a process of last resort and has a heavy burden of proof to overcome in proving that they were misrepresented or the procedure of their trial was mishandled in a way that did not allow them to present a proper defense.
Mrs. Headrick's duty is to respond to these arguments and ask the court to affirm the convictions and sentences. Additionally, the District Attorney's Office from the county where the appellate was convicted also files a brief; as both have an independent statutory duty to do so.
The second part of Mrs. Headrick's responsibilities is to represent the Georgia Department of Corrections and the Wardens of Georgia's prisons in habeas corpus actions. Habeas corpus is a civil, separate from the criminal process, challenge on the criminal conviction. An action taken after the conviction and appeals. At this juncture, it is more of a desperate attempt to prove by a preponderance of the evidence that their constitutional rights were violated during the trial or its proceedings leading to their conviction. This is extremely difficult to prove, and if successful can only yield a new trial. These habeas corpus trials take place at the various prisons around the state of Georgia thereby providing a great deal travel.
Mrs. Headrick gave a very exciting explanation of her job and it was extremely enlightening. She took several questions from the Rotarians and thanked them for the opportunity to visit and provide some insight into the Criminal Justice Division of the State of Georgia.