The Paulding County Rotary welcomed Robby Bruce and Bobby Cox from the City of Dallas Parks and Recreation Dept. Robby Bruce has coordinated with many club members about organizing events in and around Dallas, including the Annual Invitational Christmas Parade. Mr. Bruce thank the club for the opportunity to speak about the new and exciting things taking place in the City of Dallas.
Mr. Bruce excitedly explained how enthusiastic he is about his job as the Director of Dallas Parks and Recreation's Department. The opportunity to shape events to grow community participation in the downtown Dallas area is very exciting. This includes recreational events at the parks of Dallas, such as the partnership with the Board of Education to provide football at local parks. Additionally, Robby was able to coordinate with and help the Farmers Market achievement a very successful year of growth and development through cooperation with Economic Development and the Paulding Chamber. Another notable success in the community has been the Dog Park, he thanked Sam Elrod for his contributions. Still in development is the soon to be announced Orphan's Brigade Park which will be a huge and wonderful addition to the City.
Beyond the improvement and expansion of Park-related activities, Robby explained his excitement for the growing concerts and events happening in downtown Dallas. The Annual Dallas City Fest is a large and growing event that kicks off other spring and summer activities in the community. The Food Truck Friday events in Dallas have grown into larger concerts with bigger crowds. All this is creating new and exciting opportunities to engage Dallas and the greater Paulding community. Continuing to build upon the success of these events the City of Dallas is having its 1st Annual Silver Comet Drop. A New Year's Eve celebration in Dallas. The event will start at 6 PM with live music from three bands, concluding in fireworks and a Comet Drop at midnight to celebrate the new year. See local advertisements for details.
Mr. Bruce closed by taking questions and expressing how exciting and fulfilling his position with the city of Dallas has been for him over the past six years. He thanked many members individually in the club whom he has worked with on various projects. Club President Jackie Crum thanked Robby Bruce for all the hard work and collaboration that is provided to the Rotary Club and the community. 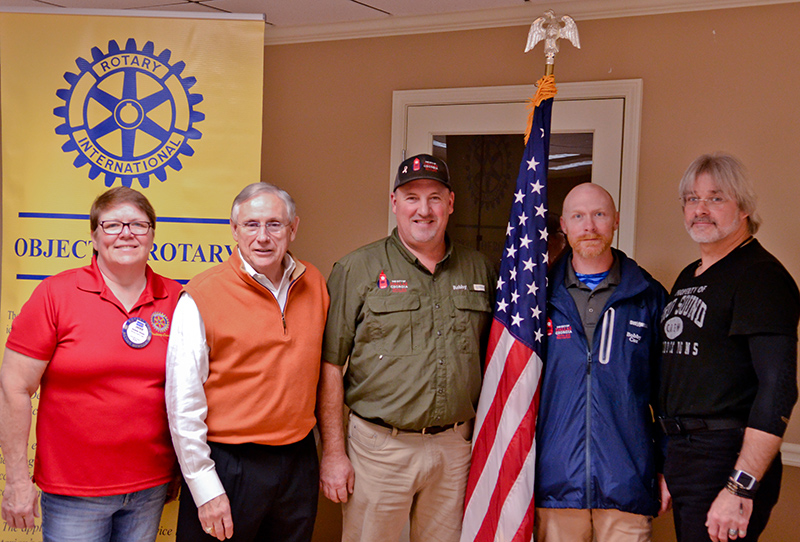