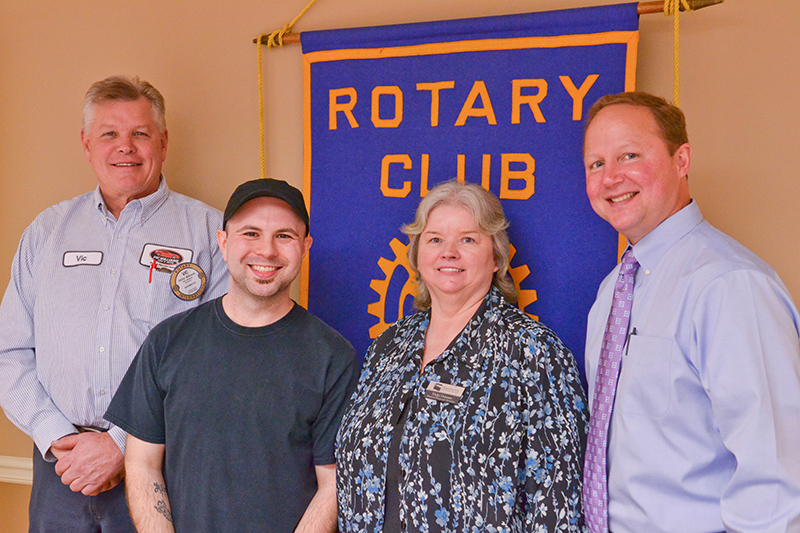 The first speaker was Mrs. Vicki Ostean. Mrs. Ostean was granted scholarship in 2008 and graduated in 2011 from Chattahoochee Tech. Mrs. Ostean recounted her childhood in West Virginia being raised the child of a cold minor, the elder of nine siblings. At an early age she began to work to help with the financial needs of the family. Ultimately Mrs. Ostean moved to Georgia and began working full-time to send money home. After getting married and raising two children Mrs. Ostean returned to school to get her GED. Eventually, Mrs. Ostean through faith and persistence with the encouragement of friends she ultimately achieved her college degree. She was the first of her family to graduate college. For the encouragement of Dr. Benson and the scholarship provided by the Rotary club Mrs. Ostean was very grateful and explain how helpful it was to her in achieving her scholastic success. She now works for Chattahoochee Tech in the financial aid department where he takes great pleasure in showing people the many opportunities for financial assistance to further their education.
The next speaker was Mr. Keith Sugarman. Mr. Sugarman is currently attending the Paulding campus of Chattahoochee Tech, and is enrolled in their welding program. Mr. Sugarman extolled a turbulent upbringing that ultimately ended in Mr. Sugarman dropping out of school at the age of 15. He began working various jobs from warehousing to retail. Mr. Sugarman continued for the next 20 years working full-time as part of the unskilled labor force. Mr. Sugarman explained how that he would eventually top out at each job and be unable to advance for lack of a certified skill set. Mr. Sugarman made the commitment to return to school as a full-time student with the support of his wife and family he was able to attain the Zell Miller scholarship as well as the Rotary club scholarship. Welding requires quite a bit of expensive safety equipment. In the Rotary club scholarship was extremely helpful in helping to provide for this equipment. Mr. Sugarman is looking forward to graduating in June of this year and currently maintains a 4.0 grade average.
Mrs. Ostean and Mr. Sugarman expressed what a wonderful campus is available in Paulding County through Chattahoochee Tech. Both speakers were extremely appreciative and grateful of all the people and support that they have received. Programs such as this one are funded by the Annual Rotary Club Golf Tournament. The Tournament is the club's largest fundraiser and helps fund the Chattahoochee Tech scholarships. This year the Rotary Club Golf Tournament will be held October 11, 2016 please call Ford Thigpen at 770-445-1855 for more information